From Old School RuneScape Wiki
Jump to: navigation, search
The RuneScape Wiki also has an article on: rsw:Chaos altar
This article is about the Runecrafting altar. For other uses, see Chaos Temple.
Altar 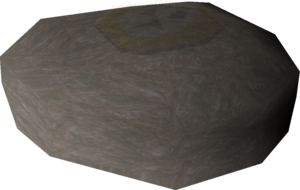 Inside the Chaos altar.

Outside the Chaos altar.

The Chaos Altar may be found in level 9 Wilderness just north of Edgeville Monastery. It is used to craft chaos runes from pure essence, providing 8.5 Runecraft experience. Unlike other Runecrafting altars, the player must traverse a 4-tiered maze in order to reach the actual altar, though this may be avoided by use of the Abyss.

There exists a shortcut portal that starts at the third level. From there, the player should go east and then clockwise to the west ladder to reach the 4th level. After that, they should head east to reach the altar.

Players generally avoid crafting chaos runes by entering the altar conventionally as it is cumbersome due to having to traverse the maze as well as it being located deeper in the Wilderness compared to the Abyss.

As with most other runecrafting altars, it can be accessed via the Abyss. Players could also enter its ruins by using a chaos talisman or simply click on the ruins while wearing a chaos tiara.

The map across all four levels

The maximum limit for crafting Chaos runes in one visit is 108. This would be achieved by having 75 Runecraft, giving a 2x bonus, and carrying 54 essence to craft (24 in the normal inventory along with 30 in the 4 sizes of pouches). The maximum possible experience is 459 obtained while doing the above.

A chaos tiara may be created at this altar by having a chaos talisman and a normal tiara in your inventory. The player must use the tiara on the altar. Doing so will earn Runecraft experience.