From Old School RuneScape Wiki
(Redirected from Chaos elemental)
Jump to: navigation, search
The RuneScape Wiki also has an article on: rsw:Chaos Elemental

The Chaos Elemental is generally killed for its dragon 2h sword and pickaxe drops. It also has a higher drop rate of the pet chaos elemental compared to the Chaos Fanatic. In addition, it is immune to venom—any items that are able to inflict venom will inflict regular poison instead.

Warning: As this boss is located deep within the Wilderness, and wanders around in a multi-combat zone, beware of player-killers! Do not bring items you are not willing to lose.

The Chaos Elemental has a spawn timer of 60 seconds.

The Chaos Elemental has three attacks. Its primary attack is a projectile attack that resembles series of three different colours fired at the target. This attack can deal either Magic, Ranged, or Melee damage — it is impossible to distinguish what damage is dealt. The projectiles hit into the 20s, but it is still suggested that players utilise Protect from Magic to reduce the chance of being hit, as the projectile deals magic damage most frequently. 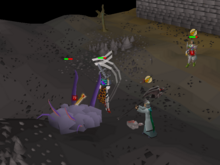 A group of players take on the Chaos Elemental.

It also has two special attacks. The first one teleports players a short space or several spaces away from it. The second attack unequips up to four items that players are wielding, forcing them to take time to re-equip their armour and weapons before continuing the battle. Like most monsters, its attacks will continue to follow the player until impact and can travel through walls. The weapon of the player is always prioritised, so when this attack is successful, the player will always have to re-equip their weapon.

However, if a player was to bring food such as curry to the Chaos Elemental, it will not be able to unequip the players items, because when you eat curry, the bowl will remain in the players inventory, giving the Chaos Elemental no room to remove your items. Another strategy to prevent this attack from being launched is to bring a sack (or basket) of potatoes, cabbages, onions, etc. Whenever you need to eat, simply empty the sack or basket after each bite. With practice this can be done quite quickly without interrupting your attacks.

This does, however, give the Chaos Elemental a chance to use a teleportation or offensive attack in turn, so you could leave just a single empty spot in your inventory for the Chaos Elemental to unequip one of your items instead of up to four. With enough practice this can save some supplies in the long run, since the unequipping attack does not deal any damage and replaces a potentially high-hitting offensive spell.

The average Chaos Elemental kill while on a Konar task is worth 27,123.65.

Major drops are accompanied by a minor drop on each kill.

There is a 4/128 chance of rolling the herb drop table.