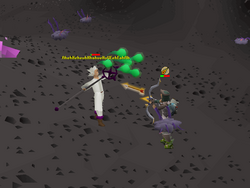 The Chaos Fanatic is an insane mage that resides west of the Lava Maze. He is surrounded by unattackable miniature chaotic clouds, which serve as scenery. He drops one of three shards required to forge Odium wards and Malediction wards. He has a special attack where he uses a green magical attack that explodes and can deal high damage, similar to the Crazy Archaeologist's explosive book attack. Players must run away from them to avoid damage. He is also able to disarm players, much like how the Chaos Elemental does. He is also one of the only monsters (including mummies, Vet'ion and the thermonuclear smoke devil) to drop the ancient staff.

The fastest way to get there is by casting Ghorrock Teleport or using its magic tablet equivalent. Alternatively, a burning amulet can teleport players to the entrance of the Lava Maze; run west from there. Alternately, players with the hard Wilderness Diary completed and a POH obelisk can select the level 44 Wilderness teleport.

One quote is said every time the Chaos Fanatic attacks the player.

The average Chaos Fanatic kill while on a Konar task is worth 13,706.2.