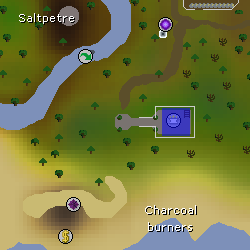 Charlie Brown was a monk located in Hosidius, up the ladder in the small church to the south (which has since been replaced with monk camping site). When spoken to, he revealed that he had journeyed to Great Kourend in search of luck and fortune,[1] and wears monk's robes to keep him holy when praying to Arengeesus, the Goddess of Luck.[2][3]

He claimed those who praise Arengeesus enough to get her attention were rewarded with luck on the adventures of those who praised her.[4] The player then attempted to refute the statement by claiming hard work is all that's needed, but Charlie Brown believed that working hard is a form of praise to Arengeesus.[5]

Following the rework of Hosidius on 23 May 2019, he was removed from the game due to his dialogue being deemed inappropriate.[6]