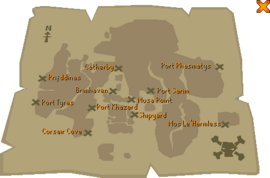 The Charter Ships (often simply called charter) are a fleet of merchant ships which form a fairly extensive shipping transport infrastructure which includes popular docks as well as ports in remote locations, run by a wealthy merchant named Trader Stan and his crew. Players must pay a fee ranging from 200 to 3,200 coins for transportation on the charter ships. The fee is dependent on the destination - destinations which are further away or more remote than others have a higher cost. As with all nautical travel in RuneScape, the transportation time is only a few seconds, during which a map of Gielinor with the destinations labelled is displayed, and an animation of a ship travelling from the point of embarkment to the destination is played. The short duration of the travel and the variety of destinations - the more remote of which having few alternate methods of transportation - make the charter ships favourable to other transportation systems, although some charter ship routes have higher costs than other transportation methods.

Trader crewmembers stand at the docks of each destination in the charter ships network, and Trader Stan himself is present at the Port Sarim dock. In addition to allowing players to charter the shipping network, the crewmembers also run Trader Stan's Trading Post, a more versatile and exotic form of a general store, which sells many items of interest as well as a few commodities which aren't stocked in specialty stores, such as Tyras helms, which are unavailable anywhere else.

Getting to the charter ships[edit | edit source]

While travelling by charter ship can be convenient for players who can afford it, it can be a bit time consuming to get to the ship in the first place, as there is no teleport that goes right next to a ship. Some of the quickest ways to get to the ships are: