The Chasm of Fire is a dungeon located in the north-west corner of Shayzien, housing a variety of demons. All of the demons can only be killed while on a slayer task.

Players can use the cage like elevators to travel between floors.

A dwarf multicannon can be used in the chasm, although it is not a multi-combat area. There are several safespots for killing greater demons on the middle floor, by utilising the piles of rocks and the narrow pathways. Resurrection spells cannot be cast whilst within the Chasm of Fire, with the message "You can't resurrect a thrall here." appearing when attempting to do so. 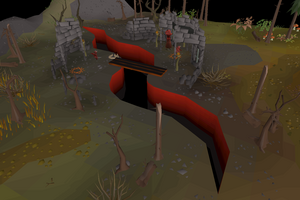 The entrance to the Chasm. 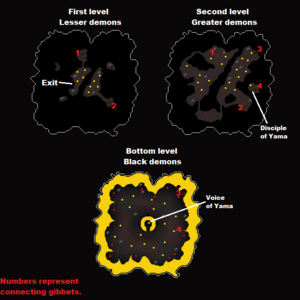 A map of the Chasm of Fire.

Monsters found in the Chasm of Fire include: 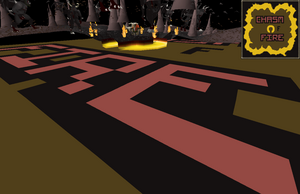 The hidden level within the Chasm of Fire, appearing to spell out "CHASM OF FIRE".