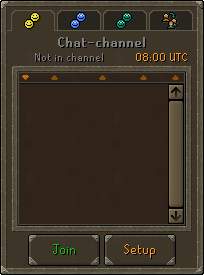 The Chat-channel feature (originally Clan Chat, also known as Friends Chat) was released on 6 August 2007, four days before the backup upon which Old School RuneScape is based; it was the last update released before the backup was made.

To enter a chat channel, players simply click on the

button in the chat interface. Players can leave a chat at any time by using the

Note: after an update on 14 May 2018, free-to-play accounts with a total level lower than 150 are unable to join chats.

The name of the player hosting the channel must be entered in the message box. Once this is done, the player is able to send messages to other players in the channel by writing messages in the public chat box with a slash before them.

The interface also contains a button for players to enter or leave a channel. Note that Jagex moderators have powers equivalent to a channel owner if they come into a channel.

Players who are breaking rules in chat channels can be reported using the report abuse button as normal.

Any player can create their own channel, using the

button in the chat interface.

The player will then be presented with an interface that allows them to set ranks for people on their friends list and control who can enter, talk, and kick other players from the channel. They can also set the channel name (limited to 12 characters), which will appear on the side of the chat box to indicate something said on that channel.

Players can restrict who can use their channels via a few methods:

Players that hold a rank corporal or higher in the channel can be granted the kicking permission (by setting "Who can kick on chat?" to the respective rank). These players will be granted the ability to remove other players from the channel, and prevent them from joining again for 60 minutes. They may only kick players with a rank lower than theirs. For example, a general with kick power cannot kick other generals. Kicking a player will remove the player from the chat and receive a message saying You have been kicked from the channel.. Temporary bans from the channel will expire after 60 minutes, banned players trying to rejoin before then will receive a message saying You are temporarily banned from this chat-channel.. However, bans can be lifted earlier if the channel is 'reset', which occurs when the channel is completely empty. Resetting can be performed in three different ways (ordered by difficulty):