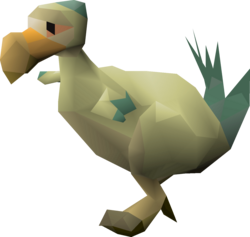 The Chompy chick is a pet that can be received as a rare drop from chompy birds, and can only be obtained by players who have completed the elite Western Provinces diary and received its rewards. There is a chance to receive the pet when the chompy bird is killed and when it is plucked.[1]

On death, if a player loses their pet (as a follower or in your inventory) it will wander around for 30 seconds before disappearing completely. The pet cannot be picked up and will disappear.

This dialogue is only triggered when the Chompy chick is battling another pet in the arena in the Menagerie.