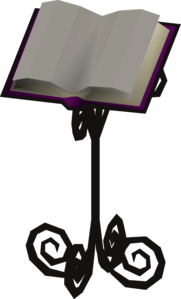 The Chronicles of Xeric is a book mounted on a lectern, found in the eastern part of the Library Historical Archive. It cannot be removed from the lectern it is on.

The book contains extracts from various historical texts and documents written during The Age of Strife in chronological order.

The following text is transcluded from Transcript:Chronicles of Xeric.
Introduction

The Grand Library of Great Kourend has verified and collated the following extracts from various historical texts and documents in order to form a factual timeline of events of life within Great Kourend under the rule of the dark mage, Xeric.

Summary: A local miner describes how his family could hear the attack that killed King Shayzien VII.

'Twas a warm autumn evening as I returned home from the mine yesterday, yet there was something cold in the air. I was looking forward to supper with my family as I stopped by the bank to store my pickaxe on the journey home.

We lived on the southern peninsula, quite a walk from the mine, but we enjoyed the peace that comes with being so close to Shayziens' Wall.

I had just arrived home when it began... the howling of arrows through the air, deafening roars of soldiers as they were slain... just outside the gates a fierce battle was waging, seemingly out of nowhere.

We'd lived here for six decades now and we'd seen enough training exercises to know this was real. Life wasn't exactly easy in Kourend under King Shayzien but this was new. I gathered the family and we held each other, fearing the battle could extend to our home. And then, as swiftly as it began, it was over. The intense clashes of shields fell silent, just for a moment, before we heard powerful cheers.

It wasn't until this morning that we heard the news. King Shayzien himself had fallen in battle, ambushed by his own army of Elder Warriors.

At first, we didn't know how to feel. Five decades of torment and struggle under his rule had come to an end, I started to remember life before, as a child, where we could freely walk the kingdom without fear of being summoned to the King for his leisure experiments. But then it crumbled away... once again our peaceful corner of the world transformed into a harmony of sudden screams and cries.

Rumors spread like wildfire, a new ruler had emerged, by the name of Xeric. Some say it was King Shayzien reborn, some say it was his evil spirit returned to revenge his death. We'd even heard that, whoever it was, they weren't human!

All we knew was life would never be the same.

Summary: A letter from Lord Piscarilius to residents of the kingdom, urging them to leave Great Kourend for fear of Xeric's power.

I must firstly apologise for my absence in the recent days, I have been forced to conceal myself during these troubling times.

You must all be made aware of the dangers that you all currently face, for Xeric is a threat to you all, even more so than King Shayzien was.

Xeric is currently sweeping through our great kingdom, decimating all authority within. Lord Hosidius & Lord Lovakengj are missing and presumed lost in battle to Xeric. It is only a matter of time before I will fall to the same fate and I do not wish for any of you to join me on this abrupt journey.

It is with both great urgency and sadness that I implore you, please leave.

You must evacuate Great Kourend. Xeric's forces will continue to advance; you must abandon your homes and head for Port Piscarilius in the hopes of finding transport elsewhere.

I bid you all farewell...

Rada's spirit be with you,

Summary: An official court marshall report detailing how a soldier refused orders to gather civilians and deliver them to Xeric.

Sergeant Yan Mattin is found guilty by plea of gross insubordination. Sgt Mattin refused to follow orders pertaining to the acquisition and delivery of civilians to the Chambers of His Lordship, Xeric, on the day of 3,470 - 37

Sgt Mattin's actions provoked unrest amongst the unit, leading to the all of the soldiers also refusing to follow the order.

Sgt Mattin pleads guilty to the charge of Gross Insubordination for which the sentence is execution by twisted archer.

Sgt Mattin will be remanded in Armed Forces custody until a date for execution has been set.

Summary: A cabin boy records how he saw a lizard-human-like creature while sailing near Mount Quidamortem.

I don't believe what I've just seen. I can't believe it. They looked like lizards... but they were acting like humans!

Slimy, white lizards but they stood tall... and walked like we do, some of them even had weapons!

What if they attack us? The mountain isn't very far from Kourend...

I'm too scared to tell anyone what I saw... is it possible my eyes deceived me?

Have I had too much rum?

The captain will have me walk the plank if he thinks I'm messing around.

Summary: A civilian explains to their brother how Lizardmen sweep the streets snatching people.

I hope this letter finds you able and well. Forgive me for not being with you for the decade dawn gathering but I'm afraid we have very little to celebrate. I am writing this letter during the first sunrise of this decade and while the sun burns bright in the sky our world remains very dark indeed.

It is with great sorrow that I must tell you our sister Morta has been taken.

It happened three days ago during the most recent gathering by the lizard creatures... we were ploughing the fields as we heard them approaching. I was able to get back inside and hide but Morta was too far away... they snatched her before I could do anything.

Please remain safe and I hope to be with you again soon.

Summary: Xamphur, Xeric's closest comrade, is known to have kept notes on various experiments. Here we see the first ever recorded mention of teleportation.

Finally! A breakthrough! Decades of study and I've finally solved it! Teleportation can be achieved!

Xeric must be informed at once!

Summary: A Letter to the members of resistance group at the height of Xeric's reign.

Fellow remaining members of Humans Against Xeric. We have failed.

Our recent attempt to storm the Tower of Magic and defeat Xeric resulted in the loss of all two hundred members involved.

I fear we may not be able to recover from this loss.

I call upon all remaining members to gather and discuss the available options urgently.

Summary: A snippet of King Byrne's coronation speech, one week after he sparked a successful revolution against Xeric.

My fellow citizens, rejoice! For we the people of Great Kourend have reclaimed our Kingdom!

However, for all that we have gained today, we have suffered many losses in our yesterday.

We must unite as we have done this week and continue to work together, not just to rebuild our kingdom but to recover our civilisation.

For ten decades we have been oppressed; and in just seven, short days we have driven Xeric and his lizardmen beyond our kingdom.

Imagine what we could achieve with ten decades of our own.
Retrieved from ‘https://oldschool.runescape.wiki/w/Chronicles_of_Xeric?oldid=10705496’
Categories: