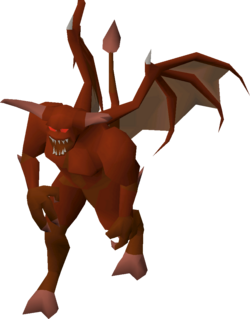 Chronozon is a blood demon that must be defeated towards the end of the Family Crest quest. It is found in the Wilderness area of the Edgeville Dungeon, by the Earth obelisk. Chronozon must be hit with all four elemental blast spells in order to be killed, or otherwise it will return to full health when it is nearly dead. Players should note that Chronozon has to be hit (i.e. do actual damage: if the spell splashes, it will not count). It will not drop the crest part unless the player has completed most of the quest. He can be fought in the Nightmare Zone after the quest is complete.

It is recommended to bring any method of curing poison before encountering Chronozon, because players will have to pass an area filled with poison spiders that may attack you before you reach Chronozon. Chronozon is unique in that it has to be hit with each of the 4 elemental blast spells, Wind Blast, Water Blast, Earth Blast and Fire Blast. A message will appear in the chatbox, saying "Chronozon weakens" to confirm that the spell has been made effective. Once all 4 elemental spells have been cast on Chronozon, players may do as they wish to dispatch of him. Since he only uses Melee, continuing to mage him or ranging him is an easy way to finish him off, as there is a safespot in the area. However, Melee can also be used.

Once defeated, it will instantly drop the Crest part onto the floor.