The clan portal at the Grand Exchange.

A clan is an organised group of players who participate together in group activities such as player killing, training skills, boss killing, minigames, or simply existing as a community of friends. Clans in Old School RuneScape have access to a number of clan-specific features, including Clan Chat, recruitment menus, the clan coffer, clan cloaks, vexillums, and the clan hall.

The clan system for Old School RuneScape was soft-launched on 19 May 2021, focusing on behind-the-scenes changes in preparation for the fully reworked system, which was launched on 26 May. 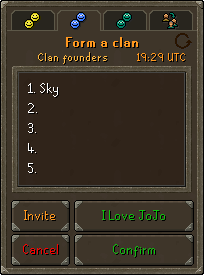 The side panel for forming a clan

To register a clan, players need to travel to the Clan Hub in the south-east corner of the Grand Exchange and talk to the Clan Hub clerk. A side panel will appear that will guide players through the clan creation process, which requires the player to have spent at least 25 hours in-game, and have four other players (five total, who must also have 25 hours spent in-game) to form a clan as founding members. A player can only be a ranked member of one clan, and only one clan can be created per player per day. Clans must have a unique name; players will be notified if the desired name is available or not.

Players can be invited as founding members to a clan by clicking the "Invite" button on the clan side panel, or by right-clicking the player within the Clan Hub and choosing the "Recruit" option.

The owner of the clan can request to resign at any point. To resign, within the clan interface, simply click: Click here to resign as clan leader. After this, a 7 day countdown will begin, after which ownership will be transfered. Owners will also automatically resign if they have not logged in to Old School RuneScape in a 90 day period. Ownership is transferred to the next highest ranking member of the clan. If there are multiple members with the same rank, the ownership is transferred to the member who has been part of the clan for the longest. 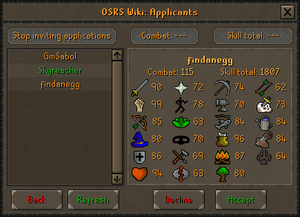 The recruitment menu for a clan

Once players are part of a clan, and they have the appropriate permissions, they can recruit other players to the clan via the "Applicants" menu. Clan members that are able to recruit can click the "Invite Applications" button on the top right to enable recruitment of prospective clan members. If a clan vexillum is equipped, they can also right-click a player and select the "Recruit" option to invite other players, though this requires the invitee to have Accept Aid enabled.

Players that are not part of a clan can look at the clan's info panel, accessed by interacting with the clan's entry on the recruitment board found in the Clan Hub if a recruiter lists their clan there. Players can also apply by joining a clan as a guest and clicking "Apply" via the "Settings" button in the guest clan tab. A confirmation message will appear before the application is sent.

Clans and their members have access to several exclusive features:

Clans have existed in RuneScape since the conception of the game. There were originally no official features in the game for clans, and players had to organise their own clans outside of the game. The most common types of clans in Old School are PvP clans, PvM clans, and skilling clans. Some clans have no specific focus, and some have a focus on specific minigames like Castle Wars, or quests.

Over the years, Jagex begun implementing features that directly benefitted clans. The first update was the release of team capes in February 2005. When worn, these do not allow players to left-click attack players with the same cape, and make it easier to identify teammates inside and outside the Wilderness. In addition to this, the in-game minimap was updated to show all players with the same cape as purple dots, thus making it easier to tell teammates apart from other players who still appear as white dots.

The RuneScape Forums offer several boards specific to clans. Players can view a thread listing open clans that they may join or advertise their own. The Clan Chat was added on 6 August 2007, which allows groups of players to communicate easily from anywhere in-game, without having to add everyone to their friends list as was common in the early years. 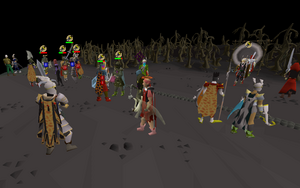 Clan Wars was originally introduced to RuneScape on 10 December 2007 as an alternative means of PvP. This was at the same time PvP in the Wilderness was removed along with free trade in order to combat the prevalent issue of botting. It was reintroduced to Old School on 19 June 2014.

From 2013 to 2015, Jagex hosted the Clan Cup. Clans could take part in a series of challenges, and the winning clans had their name added to the clan cup trophy (2013) or a clan statue erected at the former Clan Wars lobby with a likeness of their characters (2014-2015). In 2013, the Clan Cup consisted solely of PvP challenges in the Clan Wars Arena, and PvM and Skilling challenges were added from 2014 onwards.

On 25 February 2021, Jagex shared an update around a long-awaited clan rework,[1] and opened up pre-registration for players to claim clan names on 16 April.[2] Pre-registration could only be submitted by the owner of the proposed clan, and all requests were manually reviewed. The form for pre-registering clan names closed on 11 May. Successful applicants received a message to their inbox by 19 May inviting them to join a Discord server to arrange registration of their clan name, which included meeting up with a J-Mod in-game to have their clan assigned.