The Clan Cup logo from 2014 onwards

The Old School Clan Cup, also known as the Jagex Clan Cup or Jagex Cup, was an annual community event that brought clans together to battle or compete against one another in a series of challenges ("cups"). Clan Cups were first hosted by Jagex in 2009, and took place in Old School from 2013 to 2015, until they were discontinued - presumably due to the focus on the seasonal Deadman Mode tournaments.

The 2013 Clan Cup was the first Old-School Cup, and took place from October 7th to November 21st, 2013. This cup consisted solely of PvP battles, which took place in a specialized Clan Wars area accessed via a portal upstairs in the Edgeville Man House. There were 8 cups - one P2P and one F2P for each of the four types of battle. These were: All-Out (up to 100 players per side as per the Clan Chat limit), Capped (up to 30 players per side), Team (up to 5 players per side) and Pure (fights for Pure clans where players had level 25 Defence or lower).

Reign of Terror won the majority of the main cups, except for the F2P all-out which was won by Damage Incorporated. Mayhem Makers won both of the pure cups. Winners were awarded with their names added to the in-game clan cup trophy which was spawned in Edgeville after the tournament, and can now be found at Clan Wars. 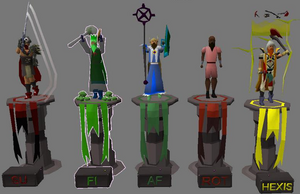 The 2014 Cup took place from July 17th to August 26th 2014. The all-out cups remained, but to replace the capped and team fights, challenges of 10v10, 20v20 and 30v30 were introduced. PvM and Skilling cups were also introduced - clans fighting here had separate arenas opened where bosses could be fought or skills trained, and the clan with the most boss kills or skilling points gained during the challenge was declared the victor.

All P2P main cups were won by Ancient Fury and all F2P fights were won by Reign of Terror. Fatality won both of the pure cups. The PvM cup was won by Stud Unit and the skilling championship by Hexis. The five winning clans were awarded with their likeness of their players replicated in an in-game statue for each clan, which were erected around the previous year's Clan Cup at Clan Wars.

Reign of Terror won all eight of the main cups (F2P and P2P all-out, 30v30, 20v20 and 10v10). Final Ownage Elite won the pure cup, and the previous year's winners for PvM and skilling (Stud Unit and Hexis respectively) won both of the cups again. The winners had their statues updated, with FoE receiving a statue of their own.

Winners of the event are added to the list of names on the Clan Cup Trophy. When read it lists all previous victors. Previously, A clan statue was erected in a specific colour with a member of the clan being depicted standing on top, but these were removed with the relocation of the Clan Wars to the Ferox Enclave in July 2020.