Clan Wars is a safe minigame located in Ferox Enclave, in a safe area of the Wilderness.

Clan Wars allows members of two opposing Clan Chats to engage in player-versus-player combat against one another.

There exists a white free-for-all portal in addition to the normal ones. This portal is used by players to practice, to have fun in a PvP zone, or to restore drained stats and Hitpoints upon exiting. Many PKers also use it to reset their Skull (status) by quickly getting killed by someone in there.

The purple portals are often used by PvP Clans to practice among their members or to fight against other clans. It is seldom used by casual Clan Chats. Instead, the free-for-all white portal is more popular.

When challenging another clan, leaders may customise the terms and conditions for winning. Once the leaders have agreed, the minigame will begin. Only ranking members who are a captain or higher are able to initiate challenges. Clanmates will be notified in the clan chat that a war has begun and can enter the purple portal. There will be a two-minute timer and a wall separating clans. At the end of the two-minute timer, the walls will collapse and the battle will begin.

Players who die will be sent to a jail where depending on the game option, can go back in or will be unable to fight again. There is also an option to watch the fight at any time via orbs scattered across the map. 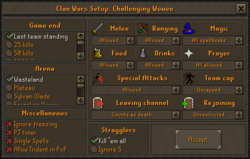 To join a fight, players must be in a clan chat, and a ranking member that's captain or higher must initiate a war with another clan chat. When the war has been initiated, players have 2 minutes to enter the arena before the war starts. Depending on the settings, once this 2 minute timer is up, players may or may not be able to enter the battle. There can only be a maximum of 100 players per side for a total of 200 players maximum. 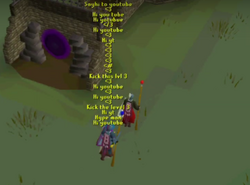 A clan falling in on their leader at the start of the battle.

A popular strategy in F2P fights is falling in. At the beginning of the war and throughout the war, a member of the clan types "fall in" and everybody follows this person into battle. The fall in leader's job is to keep everyone organized and together so that everyone is going to the same place. This is a tactic commonly utilised in F2P fights but rarely in P2P fights. One reason for this is because in members worlds, barraging is common so if everyone is together, this makes it easier for the opposing team to ice barrage a huge amount of players. 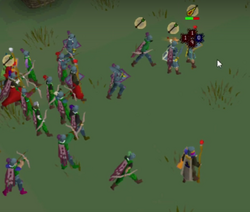 A clan piling an unfortunate member of the opposing team.

Piling is when multiple people on your team are attacking one opponent. This is also a common tactic utilised in F2P PvP scenarios because if you have more people attacking your opponent, the faster it will be to kill them. If you have enough players targeting an opposing player, and their defense level is also low, you may be able to kill them faster than they are able to heal themselves with food. Clan leaders often utilise this tactic by calling out the name of an opponent to pile next, either through voice chat or through in game chat.

Players camping on this turret during a game of Clan Wars

This is also a common strategy in F2P wars and occasionally P2P as well. One team goes to a certain area on the map and camps there and waits for the opposing team to come to them. This is commonly utilised on the turrets map as the castles throughout the arena can be used to range or mage at incoming enemies. One advantage to this strategy is that it makes it easier for everyone on your team to stick together in one spot. The disadvantage is that if the opposing clan manages to trap or overwhelm you, then it's harder to recover from.

Magic is very important in team PvP situations in both free to play and pay to play. This is why using spells to freeze your opponent in place is very common in most battles. In P2P, mages have access to ice barrage which prevents enemy players from moving. Against opponents who are only using melee, ice barrage is a very effective strategy against them as it neutralizes their ability to fight back.

In free to play wars, magic is also very important and frequently used. F2P mages have access to snare which is a spell that freezes an opponent for 10 seconds. Snare is very important in F2P wars as it can freeze people who are trying to run away, giving your team a new target to pile. The downside to maging in F2P worlds is having very poor defensive stats. To make up for this, many mages will also have rune armour in their inventory and quickly switch to wearing their rune armour if they are attacked by opposing players. 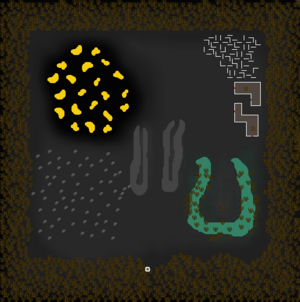 A map of the free-for-all area.

In addition to the purple portals, there is also a free-for-all portal west of the bank area. Players will be able to recognise it by its white colour. Unlike the purple portals, there are no set teams or setting up fights between clans. Instead, it is a place where players can challenge each other one-on-one, or in multi-combat zones without having to worry about losing their items.

This portal is often used by players to restore drained stats (including Hitpoints, Prayer and run energy) and cure poison, as entering the portal and exiting it (via itself or a teleport) will restore stats and cure venom and poison.

The free-for-all portal is also a popular place for players to AFK train Magic, especially in F2P. Two players wield armour, which makes their attacks always miss, start attacking each other and they go AFK. Since the fight never ends, and players get experience even if they miss, this is a decent way to train Magic.