The clerk manages the fertiliser storage of Hosidius, she is found in the centre of the saltpetre mine in south-west of the city, marked by a 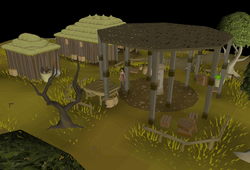 The clerk will take all sulphurous fertilisers in the player's possession, including the bank, which means players do not need to make multiple trips to donate, and can gain a massive amount of favour in one go.