{"requirements":"The ability to run past level 53 [[Ogre]]s","desc":"Help the confused Brother Kojo find the missing cogs and fix his watch tower. Search the dungeon using brawn and brains to correctly place the four cogs.","difficulty":"Novice","kills":"None","name":"Clock Tower/Quick guide","start":"Talk to [[Brother Kojo]] in the Clock Tower south of [[East Ardougne]].","length":"Very Short","items":"* [[Bucket of water]] (obtainable during quest) or [[Ice gloves]] or [[Smiths gloves (i)]]"}

Note: When placing the cogs on each respective spindle, merely move your camera so as to be able to see the ends of each spindle. Each spindle has a colour on the end. When ready to place each cog on its respective spindle, all you have to do is look at the ends of the spindles, find the spindle which matches the colour of the cog in your inventory, and use the cog on the corresponding spindle. Players cannot carry more than one cog at a time, regardless of colour. 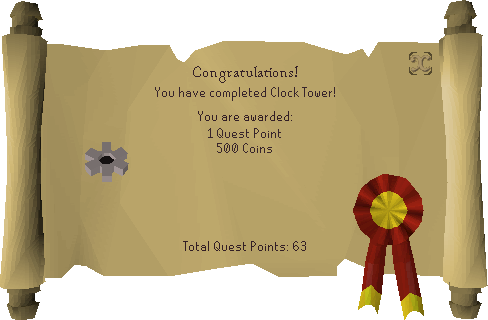