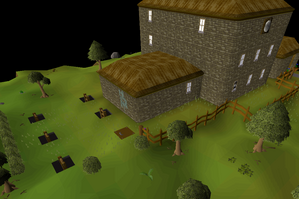 The Clock Tower is a tower south of Ardougne. There are 4 floors, the fourth one being the basement. During the quest of the same name, you have to find 4 cogs in different colours.

The owner and monk of the Clocktower is Brother Kojo, the giver of the Clock Tower quest. Kojo also gives the player a Watch for Treasure Trails.

The Clock Tower seems to be quite broken down, due to the large number of missing floorboards as well as several broken windows and a boarded-up door. The basement is also infested with a number of different monsters.

No record in the city of Ardougne has recorded the creation or purpose of the Clock Tower. It may have been that the King at the time wanted to expand Ardougne, to cover up the dungeon beneath or for cosmetic purposes.

In the Year 169, Brother Kojo becomes manager of the Tower, and the monsters below steal the cogs to run the tower for reasons unknown. An Adventurer finds Kojo and agrees to help. After locating the cogs the monsters took, the player repairs the Tower.

The quickest way to get to the clock tower is to use the spirit tree teleportation system and go to 'Battlefield of Khazard', which lands you slightly north-west of the clocktower as can be seen in the above image.