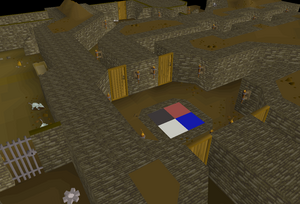 The dungeon is divided into three zones. The zones look interconnected on the map, and even in the dungeon itself you can occasionally see from one zone into another through walls of iron bars. The zones, however, are completely separate. To pass between zones, the player must exit the dungeon and travel on the surface world to the entrance of the next zone.

The dungeon map colour-codes the zones for clarity. On the minimap in RuneScape, the zones are not visually separate, making it hard to distinguish them. This can making navigating the dungeon confusing and likely is an intentional feature of the Clock Tower quest.

Despite its large size, the dungeon is rarely used except for players on the Clock Tower and Monk's Friend quests. It contains no special monsters or treasure worth collection. Players could train on the monsters here, but there are plenty of monsters to train on in more accessible locations.

This is the largest zone, and most of the Clock Tower quest occurs here.

1) The actual basement to the Clock Tower. This room contains the ladder to the ground floor of the Clock Tower. It also contains a small central compartment holding the inoperative clock mechanism with four coloured spindles (black, red, blue, white) projecting from it. During the Clock Tower quest, you repair the mechanism by finding four correspondingly-coloured cogs and placing them on the spindles.

2) The tile room. Four coloured tiles are inset on the floor in the centre of the room. These provide hints as to which doors in the room lead toward which cog. You cannot actually get the blue cog by using the door indicated by the blue tile: you can see the cog if you follow the corridor, but it is actually in Zone 2.

3) A level 2 Goblin inhabits this corridor.

4) Prison cells. There are five prison cells here, with six ladders to the surface. You cannot enter any of the cells from the corridor. Two cells each contain one level 2 goblin and two more each have one level 28 Hobgoblin. The fifth cell has a level 12 Dungeon rat and the blue cog.

(Five of the six ladders are metal, while one is wood. There seems to be no special significance to the wood ladder.)

You can access one ladder from the corridor. Climbing it exits the dungeon just south of the Clock Tower. There are five ladder openings and one trapdoor on the surface. One ladder returns to the dungeon corridor, and the other four go to the goblin and hobgoblin cells. The trapdoor is over the room with blue cog, but you cannot open the trapdoor from the surface.

6) Dead end. There is a rat poison spawn here. (Rat poison is needed in the Clock Tower quest.)

7) Two levers are on the south wall of the corridor. The levers are used to unlock access to the dungeon rat area (see #8).

8) Dungeon rat rooms. The rats are level 12. In the Clock Tower quest, the player must poison them to be able to get the white cog.

9) White cog room. The cog is here, as is a ladder to the surface. If you climb the ladder, you exit the dungeon through a trapdoor northeast of the Clock Tower. You cannot open the trapdoor from surface, so the ladder is a one-way exit.

11) Fire room. The black cog is here, with walls of fire all about. The cog is too hot to pick up, unless you are wearing Ice gloves or use a Bucket of water on the cog.

Some of the Clock Tower quest occurs here.

14) Ladder to the surface. This is the only entrance to the zone. On the surface, it is the ladder just south of the Ardougne Zoo, near the camel cage.

16) North-west prison cell. You enter the cell through a secret door in the wall (it is marked in red on the minimap.) A level 12 dungeon rat and the blue cog are here. A ladder to the surface is also here. If you climb the ladder, you exit the dungeon through a trapdoor south of the Clock Tower. You cannot open the trapdoor from surface, so the ladder is a one-way exit.

This is the smallest zone and has no importance in the Clock Tower quest. Instead, thieves use it as a hideout in the Monk's Friend quest.

17) Ladder to the surface. On the surface, the ladder is in the centre of a ring of stones. However, the ladder is visible only if you are standing inside the stone ring. Elsewhere, it is invisible (although the minimap shows its position).

19) A Child's blanket is on a table here. The blanket features in the Monk's Friend quest.