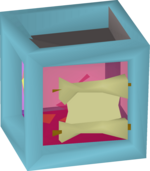 A clue box allows a player to keep a single clue scroll or reward casket on death in the Wilderness when it is held. It can be purchased from Justine's stuff for the Last Shopper Standing for 5 Last Man Standing points. A scroll/casket protected by a clue box is kept in addition to other items normally kept on death. However, a clue box is always lost on death, even if the box would normally be kept, and also even if it didn't protect a scroll/casket.

Clue boxes do not protect clues for Ultimate Ironman players.

It is recommended to avoid opening a reward casket in the Wilderness while holding a clue box, as the clue box will still be lost on death along with any non-protected items gained after the casket is opened.

This recommendation may not be reliable for players who can obtain new clue boxes more quickly than the scrolls/caskets they would protect, or players looking to fill slots in the Collection Log (such players may value the potential reward rolls more than the Grand Exchange value). Conversely, an iron player who struggles with the Last Man Standing minigame may never choose to use a clue box as the effort may be better spent on obtaining another clue scroll.

It also must be considered that the cost or effort put into obtaining a clue box itself may be better spent on equipment or supplies used to prevent death in the first place. Although rune and black dragonhide armour combined and high-healing foods may not guarantee a saved scroll/casket every time, they may be more cost or time efficient in the long run.