Clue scroll (hard) is an unobtainable coordinate clue intended to be obtained during Treasure Trails. The player would have been directed to 05 degrees 35 minutes south 26 degrees 30 minutes east in order to dig, taking the player to the middle of the desert west of Pollnivneach.

The location of the clue

It should be noted that the desert area was originally very different when the clue was first added to the game. The same coordinates instead took the player to an area south of the Desert Mining Camp that was most likely inaccessible at the time. 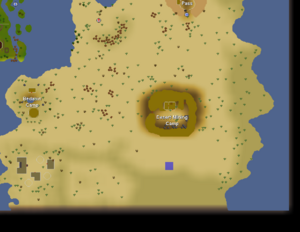 The location of the clue in October 2004.