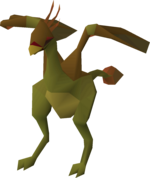 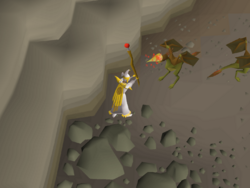 Cockatrice are Slayer monsters that require level 25 Slayer to kill. A mirror shield or V's shield is required to defend against their piercing gaze, or else they will reduce your combat stats every hit, even while safespotting. As 20 Defence is needed to be able to wield a mirror shield, players who do not meet this requirement will not be assigned them as a task. It is worth noting that their strength lies purely in their piercing gaze ability; with a protective shield equipped, do not expect much of a fight. As such, not a lot of resources are necessary to hunt this monster.

They are commonly killed because they have a relatively high drop rate of medium clue scrolls, and are often killed during Slayer tasks. They may also rarely drop the mystic boots (light).

Drop rates estimated based on 63,641 kills from the Drop Rate Project, unless otherwise cited.

The average Cockatrice kill is worth 415.97.