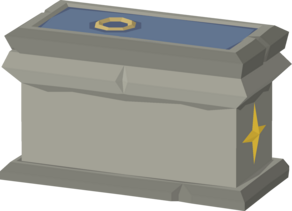 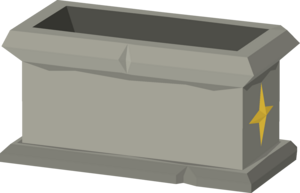 66 Thieving (boostable), granting 200 experience when successfully looted. The player will need to pass a skilling challenge and there must be time left before they can attempt to loot it. When failing to loot the coffin, the player will be poisoned.

The strange old lockpick has an increased success chance at opening a coffin when compared to the standard lockpick. It will not use any charges to do this.[1]

Coffins will always give the player hallowed marks. The number received depends on which floor the coffin is looted on.[2]

Upon opening any coffin excluding the Grand Hallowed Coffin, there is a 1% chance of a ghostly knight who once served their Justiciars to appear. The Grand Hallowed Coffin has a chance for the Archpriest of the Unicorn to appear instead. After speaking to them (with or without an amulet of ghostspeak), they will appear in the Hallowed Sepulchre's lobby if players wear a ring of visibility.

Coffins have three distinct drop tables: a low, mid and high-tier table. The chance of rolling these tables depend on the floor in which the coffin is looted:

The Grand Hallowed Coffin rolls the high tier loot table, while the last regular coffin in the 5th level will give an extra loot roll.

Drop rates estimated based on 88,000 loots from the Drop Rate Project, unless otherwise cited. The average Coffin (Hallowed Sepulchre) (Low) loot is worth 2,010.05.

Drop rates estimated based on 340,000 loots from the Drop Rate Project, unless otherwise cited. The average Coffin (Hallowed Sepulchre) (Mid) loot is worth 9,490.65.

Drop rates estimated based on 440,000 loots from the Drop Rate Project, unless otherwise cited. The average Coffin (Hallowed Sepulchre) (High) loot is worth 31,049.25.