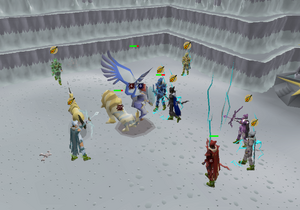 A group of players fighting Commander Zilyana and her bodyguards.

This is a guide to defeating Commander Zilyana, the Saradominist general in the God Wars Dungeon.

While Commander Zilyana has an equal amount of resistance to all attacks, Magic is generally impractical here due to a lack of armour and unnecessary rune costs.

Similarly to Kree'arra, many players prefer using an ecumenical key to skip kill count. Although Saradominist kill count is considered to be somewhat quick, this is only partially true if the player has 83 Slayer, as Saradominist spiritual warriors and mages are aggressive towards Zamorakian followers. The remaining Saradominist followers are passive and will only attack in self-defence.

Zilyana attacks with both melee and magic. Offensively, she has 280 Attack, 196 Strength, 300 Defence and Magic and 250 Ranged, +195 melee accuracy, +20 melee strength, and +200 magic accuracy. Defensively, she has +100 towards all attack styles. Despite her higher Defence level, this ultimately makes Zilyana easier to hit.

Although her max hit is relatively low, with her melee attacks dealing up to 27 damage and her magic dealing 10-20 damage, she makes up for this with an attack speed of 2 (1.2 seconds). Combined with her massive accuracy bonuses, this makes fighting her normally extremely dangerous, as the precise attacks and rapid attack speed will cause a swift death for her target. Like Graardor and K'ril however, Zilyana can only use her melee attack when in melee distance.

Zilyana has three bodyguards; Bree, Growler and Starlight, who use ranged, magic and melee and deal 16, 16 and 15 damage respectively. Her bodyguards are significantly weaker compared to the other generals', but they still shouldn't be underestimated.

Use the hit-and-run tactic on Zilyana.

The most commonly accepted method to battle Zilyana is to bring a crossbow with diamond enchanted bolts (normal or dragon, although the latter is stronger) or a twisted bow, as Zilyana has an extremely high Magic level compared to the other generals. Zilyana's chamber is larger than the other generals, which allows for an effective use of kiting. In order to kite successfully, the player will need to bring stamina potions to circumvent the weight of carried equipment. Attack every once in a while as Zilyana chases after you. Protect from Magic should be used by default, since the player's ranged defence will generally be higher than magic. At the start of each kill if available, wear a Serpentine helm and tag Bree and Starlight once to inflict venom on them.

When Zilyana dies, kill Starlight, Bree and Growler in that order. Use the toxic blowpipe to clear the bodyguards and as a source of healing. Try to make the three bodyguards attack on different ticks; if this is not possible, then ensure that Starlight attacks on a different tick to Growler as to pray flick 2 of the 3 incoming attacks. Both Starlight and Bree have unnaturally high health and trying to use Guthan's or Blood Barrage might not be fast enough to kill them before Zilyana respawns.

Zilyana and her bodyguards drop bones, so bring bones to peaches tablets to restore 32 health at the end of each encounter. Zilyana also drops saradomin brews, super restores and prayer potions, while the bodyguards can also drop monkfish and summer pies to help prolong trips.

In a team setting, if Zilyana cannot attack her current target, she will change her aggression to a nearby attacker. This is commonly used by ranging teams to minimise the amount of stamina potions needed, allowing for other supplies to be taken. Team settings also allow for melee, although players will need to be wary of Zilyana shifting aggression when she cannot attack her target.

With an alt, a player can use it to carry additional supplies and also kill Bree and Starlight. Since the bodyguards will only attack those who have attacked Zilyana if multiple players are in the room, they will never attack the alt account, making the only danger Zilyana's magic attack. The alt should be using a blowpipe set on Accurate or Long Range to whittle the bodyguard's health while not killing them too fast that they would simply respawn. This also saves the player from carrying a serpentine helm to envenom the bodyguards at the start of the kill.