Construction is a members-only skill that allows players to build their own houses and provide furniture for them. To begin Construction, players must buy a house from one of the estate agents. A starter house will cost 1,000, and will be in Rimmington. A level 40 Magic spell can then be used to teleport to the house, or players can walk to Rimmington, where there is a portal (

icon on the map) that will teleport players to their house.

The house starts off with only a parlour and garden, but furniture and additional rooms can be built. To build, go to the options menu, select house options, and set the building mode mode to on. Players will then see what looks like ghost-like hotspots where new objects can be built. See the Constructed items list for details on what you can build at what level.

Players can also visit a friend's house if they are home and using the same portal.

The first step in training the construction skill is buying a player-owned house. A house costs 1,000 coins and can be bought by talking to an estate agent. Alternatively players can complete the miniquest Daddy's Home earning a house as a reward.

Estate agents are NPCs that sell players land to build their house on. These agents can be found in several major cities: Varrock, Falador, Seers' Village, East Ardougne, and Hosidius. They are identified on the minimap by a symbol of a small house (

). Players must pay 1,000 coins to purchase their first house in Rimmington, and begin training the Construction skill.

After reaching certain level milestones between level 1 and 50, players can pay an estate agent to move or decorate their house. For more information on this subject, visit the estate agent page.

Estate agents also sell the Construction cape for 99,000 coins to anyone with level 99 Construction.

A Teleport to house tablet.

How to get to your house[edit | edit source]

There are four ways to enter your player-owned house. The first option is by entering the POH portal that is connected to your house. The other options are by teleporting into your house.

The locations of POH portals are identified by the portal

icon on the world map.

When first bought, the player-owned house is located in Rimmington. Players can move their house to Rimmington (

How to build in your house[edit | edit source]

After entering their house, players are able to start training Construction. To do so, first enter the building mode. While in the building mode, translucent hotspots will appear indicating objects can be built here.

There are two ways to enter the building mode of your house. The first option is to right-click the POH portal and selecting the 'build mode' option. The second option is by going to the Options menu in the main game interface. Once "House options" button is chosen, players can toggle Building mode ON and OFF.

While in this building mode, players can purchase extra rooms or build furniture.

See the player-owned house page for more information on the exact level requirement and the cost of each room.

Each room has a wide and unique variety of objects than can be build in them. The locations for these objects are indicated by their hotspots while in building mode. In order to build an object, right-click the hotspot to open the Furniture Creation Menu and choose one of the available options.

The Furniture Creation Menu will show the Construction level requirement and the materials needed for all objects that can be build in that hotspot.

Besides having the Construction level and material requirements, players will also need to carry a hammer and saw in their inventory in order to build most objects. A filled watering can is needed to add plants to your gardens.

There are multiple materials needed for constructing your house. Most furniture options contain one or more of these items that are often used in the Construction skill. When used in a piece of furniture, these items will reward the player with a set amount of Construction experience. (i.e. When constructing an object with oak planks, this will always reward the player with 60 experience per plank.)

Servants can be hired at the Servants' Guild, the very north-eastern building in Ardougne. There are five different servants, which can perform various services. All servants are able to greet guests entering a players' home, but some will have different abilities, such as taking items to and from the bank or sawmill. The higher level servant a player has, the faster their service is, the better food they provide, and the more items they can carry to or from a bank or sawmill.

A player must have at least two bedrooms with beds in them in order to hire a servant. A player may only have one servant at a time; if a player wants to hire a new servant, they must fire their current one first.

Phials is an NPC located next to the Rimmington General Store in Rimmington who will un-note items for 5 coins per item.

Phials is commonly used by players training Construction due to his proximity to the Rimmington house portal. He is also useful for training Prayer on a gilded altar in a player-owned house.

Mahogany Homes is an alternative method of training that tasks players with constructing furniture for various NPCs across Gielinor.

When the Construction cape is equipped or in the inventory, it provides unlimited teleports to the player's own house and to the house portals located in Rimmington, Taverley, Pollnivneach, Hosidius, Rellekka, Brimhaven, Yanille, and Prifddinas.

There are 103 STASH units in total found throughout Gielinor. These locations are initially labelled as inconspicuous bushes/crates/holes/rocks, and, once built, become usable STASH units. Players can check which units they've already built/filled by visiting Watson and reading the noticeboard within his house, or reading the chart in their PoH study after it's been built. 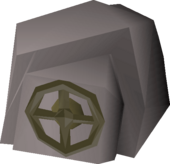 Upon completing any of the following quests, players may choose to allocate experience to Construction. These rewards usually come in the form of items, such as lamps or books, and are independent of any experience rewards directly received for completing the quest.