From Old School RuneScape Wiki
Jump to navigation Jump to search
The RuneScape Wiki also has an article on: rsw:Construction training

Construction is one of the most expensive skills to train in Old School RuneScape. It is recommended to have a lot of spare money to buy a large number of planks from the Grand Exchange beforehand, so players will not have to constantly buy more supplies whenever they run out.

To start off, players must purchase a player-owned house from any Estate agent, which costs 1,000. Alternatively, they may complete the Daddy's Home miniquest, which gives a home as one of its rewards, as well as a crate of Construction supplies and enough experience to reach level 8. Players' houses are located in Rimmington by default, but can be moved later to one of 8 different cities for a fee. The house will have two rooms; a Parlour and a Garden; apart from the exit portal in the garden, there is nothing built for the player.

Players will need a saw and a hammer to build items. It is recommended to have level 40 Magic to be able to cast Teleport to House. Alternatively, players can break a teleport to house tablets.

Construction is trained by repeatedly building and removing various furniture inside the player-owned house. Planks are the primary material for training, and using them costs money. Normal accounts should buy the planks from the Grand Exchange, and it is recommended to have a lot of spare money to be able to afford a large amount of them at once. While making planks from logs can save money, it does not give any experience and is therefore considered simply a money making method for normal accounts.

There are four tiers of planks: regular, oak, teak, and mahogany, each with increasing cost and experience gained from using it. Planks yield the same amount of experience per plank regardless of what furniture is built, except for the mounted mythical cape and some low-level furniture which use regular planks. As such, players should seek to use the highest tier of plank they can afford (and have the level for) as quickly as possible with the methods below.

The below table shows the costs to obtain level 83 (typically players stop here to boost (+8) for the ornate jewellery box).

The below table shows the costs to obtain level 99. 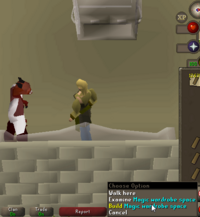 Using the trick to build and remove without moving the mouse after right clicking.

A trick to train with minimal mouse movements is to play in resizable mode and zoom all the way in. Widen the game a bit so that there is some space between the chat box and the right hand side control panel. Position the Hotspot you want to train at the bottom of the screen. Then position the mouse over the hotspot and slightly higher than the report button. If done right, the build and remove options should be in the same spot as the right click.

When building various items in the player-owned house, there will be a number hotkey for fast Construction training. When removing the said item(s), press the "1" key to immediately remove it.

At level 30, players can turn long and curved bones in to Barlak for both Construction experience and some coins. He can be found inside the city of Dorgesh-Kaan, which requires completion of Death to the Dorgeshuun to access. These bones are only dropped by monsters which also drop big bones. Even then, the special bones are rare, with long bones having a drop rate of 1/400 and curved bones at a rate of 1/5,000.

From level 1 to 40, players should have their player-owned house in Rimmington, and bring noted planks in their inventory and unnote them at Phials for 5 coins each. This is faster than fetching the planks from a bank. It is recommended to bring weight-reducing gear, such as the graceful outfit, so players will not deplete run energy as fast when going to and from their house. When entering back to the house, players can right-click the house portal to enter the house in building mode.

At level 40, players can hire a servant from the Servants' Guild in East Ardougne to assist their training. To be able to hire a servant, the player's house must have at least two bedrooms with beds constructed in each one. Servants can be used to unnote more planks (or fetch them from the bank), and using them is significantly faster than unnoting planks at Phials. This costs money, but the increased speed is well worth the extra cost.

The Butler should be used from level 40 to 50, and the Demon butler from level 50 onwards. Using lower-level servants is not recommended, because all other servants below the human butler will be too slow.

Servants will request a payment after 8 services completed, and players will need to have coins in their inventory to pay them. At level 58, the player should build the servant's moneybag in one of the bedrooms and put coins in it, which will automatically pay the servant while they perform tasks. This skips the dialogue of the servant requesting payment, which will save a lot of time in the long run.

The below table shows the furniture and materials needed to reach level 33.

Players can complete Daddy's Home miniquest, which grants a total of 944 Construction experience. This will get the player up from level 1 to 8.

From level 33 to 52, the player should build oak larders in the Kitchen. Oak larders require 8 oak planks to build, and they grant 480 experience each.

Players can gain up to around 480,000 experience per hour from level 50 onwards. If players wish to use oak planks as a cheaper method of training construction, they should switch to oak dungeon doors (listed below) at level 74, as they provide faster experience rates than building oak larders.

Building mahogany furniture becomes the fastest viable training method at level 52, however it is very expensive.

At level 52, players can build mahogany tables in the Dining room, which is the second fastest way to use mahogany planks. Each mahogany table requires 6 mahogany planks and gives 840 experience. The optimal method is to build 3 tables and remove 2 tables in the time the Demon butler takes to fetch planks from the bank. Each inventory cycle takes 22 ticks (on a consistently low ping world). In higher ping worlds, it is recommended to remove 3 tables and build 2 tables (23 ticks/inventory) or build 2 tables and remove 2 tables (24 ticks/inventory) while the Demon butler fetches planks. The 22-tick inventory cycle is shown below:

Mahogany Homes is a slower but cheaper and less click-intensive alternative to traditional Construction training. Players work as a contractor for the Mahogany Homes company, repairing furniture in NPC houses throughout Falador, Varrock, East Ardougne, and Hosidius. As such, it is highly recommended that players have teleports available to all four cities, such as teleport tablets or runes, and a charged Xeric's talisman for Hosidius.

Estimated costs for this training method are -2.25 GP/XP for Novice contracts, -2.60 GP/XP for Adept contracts, and -5.47 GP/XP for Expert contracts (see chart below). A hammer and saw is required as well as the level requirement for each tier and respective materials. No nails are required.

To begin, speak to Amy in Falador as the owner of a player-owned house. Players can then take on a contract depending on their Construction level. Amy provides additional rewards, such as the carpenter's outfit for bonus construction experience, the plank sack, and supply crates. Additional contracts can be acquired from Amy, or from Marlo in Varrock, Ellie in East Ardougne, or Angelo in Hosidius.

NPC houses for repair tend to be located near estate agents which also house the aforementioned contractors. NPCs will also offer the player a "cuppa tea," replenishing run energy to 100% after completing the contract.

Mounted mythical capes require 3 teak planks each along with a mythical cape (the cape is reused). Building them requires completion of Dragon Slayer II, which requires having at least level 50 Construction. Each mounted mythical cape gives 370 experience, granting more experience per teak plank than other items, which makes it a competitive training option for Ironmen, for whom planks are not as easy to obtain. However, this method is not recommended for normal accounts, as oak larders offer faster experience and they are usually similar in cost.

In case of mistakes, it is very helpful to have an equippable item in the inventory as players cannot remove a mounted mythical cape if they have a full inventory of planks.

Players can gain up to around 430,000 experience per hour with maximum efficiency.

Building teak benches is a cheaper but significantly slower alternative to mahogany. Depending on the prices of planks, players who wish to save money likely find it better to build oak furniture instead, as it is only slightly slower than teak. Likewise, players who wish to gain faster experience may find it better to spend extra money on building mahogany furniture instead, as this would save around 7-8 hours on the way to level 99 depending on the method and efficiency.

Players can gain a maximum of around 700,000 experience per hour building garden benches at level 66 with perfect execution, however, most players should expect to gain 500,000 to 600,000 experience per hour. It should take just about an hour to reach level 74 with good execution, at which point players can consider building oak dungeon doors, which offers slightly slower experience rates at the benefit of potentially reduced cost.

Building oak dungeon doors is a cheaper alternative to mahogany or teak furniture. Building an oak door requires 10 oak planks and grants 600 Construction experience. Players can gain up to around 550,000 experience per hour with maximum efficiency.

With the demon butler, the player must use the 'build and remove' trick as seen above whilst also holding down 1 constantly. Whilst holding down 1, click your demon butler to make him fetch 25 oak planks, you have just enough time before he returns to build and remove the two doors. You will end up with five spare oak planks in your inventory, have your build option on the door ready for when the demon butler comes back then make and remove another door as soon as you get planks, then click the Demon butler twice to send him off for more planks and in the meantime make and remove the two remaining doors, before starting the process from the beginning.

Alternatively, you can use a human butler. For the human butler, you should have enough time to build and remove two sets of doors before he returns if you use the 'holding down 1' trick. It is recommended to stand in the 1x2 space behind the door while building. On the second set of doors, do not remove them until after you have sent your butler for more planks. This will force the butler to spawn next to you and make it faster to receive the planks and send him out to get more. If you can send your butler out quickly after he comes back, you can expect around 270,000–300,000 experience per hour.