Cook's Assistant is the first RuneScape quest ever released. In the quest, the player must obtain a bucket of milk, an egg, and a pot of flour for the Cook of Lumbridge Castle who is running low on time to make a birthday cake for Duke Horacio.

This quest was one of the six available during RuneScape's launch, and was originally developed by Paul Gower.

A feast for a Duke[edit | edit source] 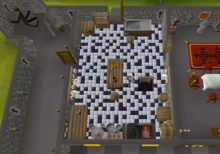 Begin the quest by talking to the Cook in the kitchen on the ground floor[UK]1st floor[US] of Lumbridge Castle. He mentions it is Duke Horacio's birthday and that he is supposed to bake a cake for it. However, he has forgotten to buy the ingredients and asks the player to bring him a bucket of milk, an egg, and a pot of flour.

Note: You can skip the intended process by bringing a pot of flour, a bucket of milk, and an egg with you. After starting the quest with all of these items, you say that you happen to have those items with you and the cook will ask if you were planning on baking a cake, completing the quest in seconds.

The location for an egg north of Lumbridge.

Go east out of Lumbridge Castle and run north along the path until you reach the chicken coop north-west of Farmer Fred's house. Go into the coop and pick up an egg.

With an empty bucket, go north into the cow pasture. Use the empty bucket on a dairy cow to get a bucket of milk. Optional: You may talk to Gillie Groats across the river to the east in Lumbridge cow field next to the dairy cow for an explanation on how to get milk from it.

With an empty pot, leave the cow pasture and go south-west to the wheat field. Pick up a grain then enter the Mill Lane Mill to the south-west. Optional: You may talk to Millie Miller inside the mill for an explanation on how to make flour. Climb to the top floor, put the grain in the hopper, pull the lever, then climb back down to the ground floor[UK]1st floor[US]. Use an empty pot on the flour bin full of flour to get a pot of flour.

Recommended: If you are a member, the easy Lumbridge & Draynor Diary requires baking bread on the Lumbridge Castle range, mill a second pot of flour for bread dough now to complete the task.

After collecting the ingredients, speak to the Cook to deliver them. 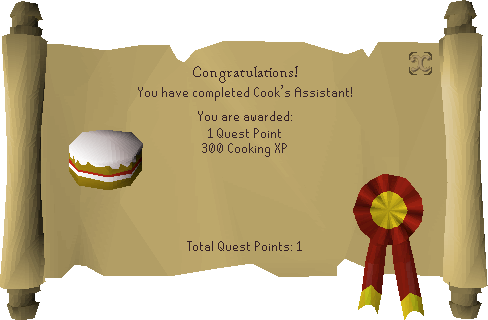 The completion of Cook's Assistant is a requirement to complete the following: