Cooking is a skill that allows raw food to be made edible, healing hitpoints when eaten. To do this, the player uses a raw, cookable food on a range or fire.

Cooking goes hand-in-hand with the Fishing skill as the player can cook the fish they obtain. If no range is nearby, having an axe and tinderbox on hand can allow the player to cut down a tree and make a fire to cook the fish on.

By levelling Cooking, the player is able to cook better foods such as swordfish, shark, pies, and pizzas. If a player achieves 32 cooking, they can access the Cook's Guild near the Grand Exchange.

How to cook[edit | edit source]

Cooking is known as one of the fastest skills to train, as players can cook in many different ways as well as being able to simply buy their raw food items from the Grand Exchange.

Before the Grand Exchange was created, the bulk of players usually fished and then cooked their catches. Generally a player who is manually gathering their raw items will cook their food items on a local campfire created through the Firemaking skill near where they are gathering, or take the items they have obtained to a range and cook there.

) icon. There are other assorted things that a player can cook on, seen in NPC camps, or on iron spits. It is important to note that only meat, fish and stew can be cooked on an open fire. Foods like bread, cake, and pie must be cooked on a proper range, Most of these food items will generate an error message if the player attempts to cook it improperly while others, such as raw potatoes, will simply all burn. Raw foods loosely related to the Hunter skill, such as raw beast meat, raw chompy, and rabbit, must be cooked on an iron spit.

To actually cook something, players have to "use" their raw food item on a range or a campfire. If they have more than one food item of the same kind in their inventory, a picture of the food item will appear in the dialogue box. Ranges can also be left-clicked to automatically bring up this interface. The player can right-click on the picture and select how many they want to cook, or left click to cook all of them (default option).

If this is your first time cooking follow these steps for maximum effect:

As players train Cooking, they will sometimes fail to cook something at random, resulting in no Cooking experience gained. It is normal when you first begin training this skill to burn nearly anything you cook on a fire or range, but as you gain more levels the burn ratio of food decreases until you reach a level where you can no longer burn them.

A useful item to equip while training are cooking gauntlets. Wearing these gloves while training Cooking will cut down time and money due to less food being burnt. This is useful for food such as sharks where even at 99 you have the chance to burn them; with the cooking gauntlets equipped, you will stop burning sharks at level 94. Alternatively, cooking food while wearing a cooking cape will ensure that no food may be burned by the player.

All ranges have a lower burn rate than fires, but there are also special ranges which offer decreased burn rates. These can work in conjunction with the cooking gauntlets. Unless the player is cooking something with 100% success rate, it is recommended to use these where possible to decrease the amount of burnt food. The recommended range to cook on for members is in the Hosidius Kitchen, usable after gaining 100% Hosidius favour. This range grants a 5% increased chance to successfully cook food (10% if elite Kourend and Kebos diary completed) and is very close to a bank chest.

The range in Lumbridge Castle also has a lower burn rate, usable after completing the Cook's Assistant quest. The nearest bank to this range (for members) is the Culinaromancer's Chest in the cellar, which requires the first part of the Recipe for Disaster quest to be completed, or the bank at the top of Lumbridge Castle for free players. This range has a reduced burn rate, however, only works on the following foods:

As Cooking is the skill of turning food from raw to edible, and there is a very wide range of available food types in RuneScape, there are many items that players need in order to cook food. Depending on what you are cooking, you will need a variety of items such as water or flour. Listed below are the cardinal cooking items which are used to make the most common types of food.

Note that every wine made resets the twelve second fermentation of the previously made wines, resulting in an enormous experience drop if a series of inventories are made fast enough. While being one of the fastest methods for reaching 99 Cooking (yielding 400k+ exp/hour if done optimally), it is also the most costly. There is virtually no profit made as opposed to the more traditional fish cooking. This method is also accessible to free-to-play. 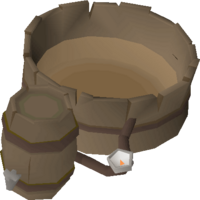 Brewing involves the fermenting of raw ingredients into ales or cider. Brewing is useful because most products boost certain skills. The process, however, is quite slow and is not a viable means of training. These alcoholic drinks are not useful for healing, unlike most food made with Cooking. Brewing takes place at two fermenting vats, one is located in eastern Keldagrim, on the 1st floor[UK]2nd floor[US] of the Laughing Miner Pub and the other is located in Port Phasmatys underneath the The Green Ghost pub. Only one brew can be made in a vat at a time.

During the brewing process it is possible for an ale to mature, normally a 5% change, or 36%[1] when adding the stuff. The stuff cannot be added to cider. Mature ales have stronger boosts. It can also turn into bad ale which has no use and is drained from the barrel.

To make an ale, 2 bucket of water, 2 barley malt, 1 ale yeast, and optionally: 1 the stuff are required:

Most brews boost certain stats, some boost a variable amount based on the skill's level, boosting more as the level increases.

Gnome cooking is very complicated, and is best left with its own specially dedicated guide. The gnome foods plays a big part in the Gnome Restaurant minigame. More detailed information can be found in article linked to above, but following is a general guide for how a player can get acquainted with gnome cooking.

Although it is complex, somewhat expensive, and requires a wide variety of unusual ingredients, gnome cooking can provide a good way to level Cooking from around 10 up to about 30 in good speed. To obtain the cookbook with all the recipes for gnome foods, a player can go to The Grand Tree in the Gnome Stronghold and find Aluft Gianne Sr. He is on the west side of the first level up of the Grand Tree and is dressed as a chef. Talk with him, and offer your assistance to him. He will assign you a succession of dishes to prepare. Once you have prepared the dish to his satisfaction, he will ask you to make another, then another moving steadily up the assortment of gnome foods. If you are using this method to train your Cooking and get an assignment you do not have the correct level to prepare, then you simply need to train until you do. Use the shops and resources in the Gnome Stronghold to make more gnome foods if you wish, or cook other foods that you may have. For each dish, the player can buy supplies from the shop run by Hudo who is found by the cooking range nearby Gianne, but ever since the shop stock update this has been severely limited. Players going through the tutorial will start by making crunchies, which can stored at a bank in the Grand Tree and later sold on the Grand Exchange. As your skill levels improve, you will be able to make battas then eventually bowls. Once you have completed the training exercises he gives you, you can start the minigame, which has several useful rewards.

2-tick cooking demonstrated at the range in Myths' Guild.

After an update that allowed players to left-click to interact with ranges, it is now possible to cook any food item (except raw karambwan) at double speed. To perform this, drop all your raw food items in front of a cooking range, then alternate between picking up a raw food item and left-clicking the range. This works because the cooking interface is skipped when only one raw food item is in the inventory, and the item is cooked with no delay. Due to the time it takes to drop items, the experience rate will not be exactly doubled, but this is the fastest way to cook the majority of food items.

Upon completing any of the following quests, players may choose to allocate experience to Cooking. These rewards usually come in the form of items, such as lamps or books, and are independent of any experience rewards directly received for completing the quest.