The Corporeal Beast, often referred to simply as Corp, is a large monster residing in its cave, accessible via a games necklace or through an entrance in level 21 Wilderness east of the Graveyard of Shadows. It has a very large health pool of 2,000 Hitpoints, coupled with high Defence and 50% damage reduction against most weapons; only spears and halberds (on stab attack style), Osmumten's fang and magic deal full damage. If all players leave the room, its Hitpoints regenerate at a rapid rate.

The Corporeal Beast is the only monster to drop the spirit shield, as well as the holy elixir and arcane, elysian, and spectral sigils, used to enhance it. In addition to its sigil drops, the Corporeal Beast has many other valuable drops.

Players can pay 200,000 coins to open a group instance for their clan.

The lair of the Corporeal Beast is located in level 21 Wilderness, although players can teleport directly there using a games necklace. This will take the player to a small safe room with a large doorway to Corporeal Beast.

Ironmen with a combat level of 90 or higher have a separated Corporeal Beast room. All other accounts use the normal room. This is to reduce griefing and ironmen using normal accounts to use stat-reducing special attacks. 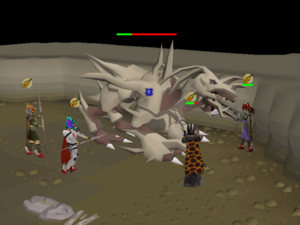 A group of players fighting the Corporeal Beast.

The Corporeal Beast has a 50% damage reduction against any weapon that is not a spear, halberd, or Osmumten's fang on stab attack style. Although magic also deals full damage, it is highly inaccurate against the beast. Protect from Magic does not fully block its magic attacks; it only reduces the damage by 33.33%. The Corporeal Beast has very high accuracy, damage, and Defence.

Drop rates estimated based on 434,422 samples from the Drop Rate Project, unless otherwise cited.

There is a 12/512 chance of rolling the gem drop table, whereupon its contents are rolled 10 times.[2]

The Corporeal Beast was originally released on 15 September 2008 in RuneScape. However, there are several differences between the iteration of this boss in Old School RuneScape and the original in RuneScape.