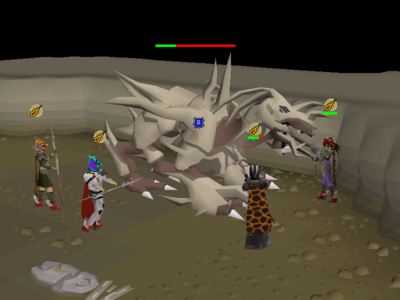 A group of players fighting the Corporeal Beast.

The Corporeal Beast is a high level boss monster in Old School RuneScape.

There are no strict requirements to killing the Corporeal Beast.

The Corporeal Beast can occasionally send out a dark energy core. It has a 1/8 chance of spawning whenever the Corporeal Beast is hit for at least 32 damage, or when it attacks while its hitpoints are under 1,000. [1]

The Corporeal Beast has a 50% damage reduction against any weapon that is not a spear or halberd on stab attack style. The crystal halberd special attack is capped at a maximum damage of 50 per hit (for a maximum total of 100). This damage reduction also does not apply to magic or recoil damage (such as Vengeance or rings of recoil) or Retribution.

Protect from Magic does not fully block its magic attacks; it only reduces the damage by 33.33%. It has very high accuracy, damage, and Defence for its level. It attacks normally every 4 ticks, but it can occasionally attack 3 ticks after its last.

By default, the Corporeal Beast regenerates each drained stat once every 20 ticks (12 seconds), regardless of if there are players in the room. If there are no players in the cave, it will heal 25 hitpoints every 7 game ticks (4.2 seconds), and will fully heal after three minutes if no one has attacked it.

If there are eight or more players in the room simultaneously, it will regenerate an additional 5 Hitpoints per player every 7 ticks (4.2 seconds), which coincides with the stomp attack timer.[2]

Ironmen with a combat level of 90 or higher have a separated Corporeal Beast room. All other accounts use the normal room. This is to reduce griefing and ironmen using normal accounts to use stat-reducing special attacks.

To deal with the dark energy core, a number of strategies can be used:

While weak to stab attacks, the Corporeal Beast has a very high Defence level. A common method to lower its Defence is to use the dragon warhammer, arclight and Bandos godsword's special attack at the start of the fight.

The dragon warhammer's special attack is very useful in significantly increasing the player's damage output while fighting the Corporeal Beast.

It is recommended to bring item switches for gear that boost crush accuracy while using the dragon warhammer's special attacks, such as the tyrannical ring (i), mythical cape and dwarven helmet.

For teams, it is often recommended to only reduce the Corporeal Beast's Defence level before proceeding to killing it, as it takes more time than it is worth to further reduce its stats in bigger groups.

As most Corporeal Beast strategies heavily rely on using special attacks in quick succession, it is highly recommended to have a restoration pool or better in the player-owned house. Alternatively, players can pray at the Elidinis Statuette in Nardah after completion of

Spirits of the Elid quest. Both methods will restore the player's special attack energy.

To return to the Corporeal Beast quickly, it is highly recommended to have a basic jewellery box or better in the player-owned house. Alternatively, bring enough games necklaces in the inventory.

If no special attacks hit, players may typically restore their special attack through a restoration pool (or higher) and teleport back.

Players can pay 200,000 coins to host an instance. Players ranked as Captain or above in a clan chat can pay the instance cost for their clan. Once the instance is opened, anyone from the clan chat will be able to enter the instance for no cost. As long as there is one player present in the instance, it will remain open.

For solo players (or small teams with low stats), killing the Corporeal Beast without massively reducing its stats can prove difficult as they may run out of food before killing it. Therefore, it may be more beneficial to drain its combat stats to zero by using their player-owned house to restore special attacks and teleport back repeatedly. An effective strategy is to hit three dragon warhammer special attacks to lower its Defence to approximately a third, then hitting twenty arclight special attacks to reduce its melee stats to zero, and then deal a total of 200 damage with Bandos godsword special attacks to reduce its Magic to 0. Following this, the Corporeal Beast can be killed with relative ease and little food required. As a downside, the process is very slow; including the time to reduce its stats, solo players will take approximately 10 to 15 minutes per kill. However, it is the only realistic option for ultimate and hardcore ironmen to kill the boss.

An alternative strategy is only lowering its Defence and dying in the boss room with an inventory full of food; because of the changes to death mechanics, it will stay on the floor for 60 minutes. This will supply the player with enough food to outlast the boss. This strategy requires more effort and supplies, but it results in faster kills. Gear with a higher emphasis on magic defence is highly recommended, as the Corporeal Beast will be able to deal damage as normal.

Though the beast will regenerate its stats throughout the fight, it usually does not have enough time to regenerate much before it is killed. However, as it regenerates its Magic level, the chance of its attacks becomes more likely, and its maximum hit remains the same regardless of its Magic level. Therefore, using Protect from Magic and gear with high magic defence is beneficial even if its stats are reduced to prevent taking high damage hits.

This is the best-in-slot available equipment for soloing the Corporeal Beast. This section assumes that the player is using the stat draining method to completely reduce the Corporeal Beast's damage output. The setup shown in this section currently costs approximately 227,541,319 coins (or 114,688,844 without the Inquisitor's great helm and avernic defender, which are only marginally better for their high cost). See the table below for an overview of equipment alternatives in case this setup is not accessible or too expensive.

This sections assumes that the player is using the stat draining method to completely reduce the Corporeal Beast's damage output. Otherwise, this gear's Magic defence stats are too low. The setup shown in this section currently costs approximately 129,253,838 coins (or 87,488,351 without the avernic defender, which is only marginally better for its high cost). See the table below for an overview of equipment alternatives in case this setup is not accessible or too expensive.

Note that elite void robes do not provide any additional offensive bonuses for melee compared to normal void; the only difference is the +3 prayer bonus per piece.

This method focuses on draining only a part of Corporeal Beast's defence and dying in the room to have an extra supply of food. As the majority of the time is used on killing the boss as opposed to draining its stats, this method is slightly faster but requires more high-end gear and is more resource and skill intensive.

Before equipping this setup, use three dragon warhammer and four to six arclight special attacks on the boss, then purposefully die within the room (preferably close to the entrance) with a full inventory of cooked karambwan two or three times; unless picked up and dropped again, these will stay on the floor for a full hour before despawning and serve as extra supplies that will be needed due to the boss's high damage output.

The setup is based on a mix of magic defence and strength gear. For ironmen, including the time to obtain the extra food used, this method may not be faster effective kills if you do not have some of the demonstrated equipment such as Armadyl armour. It also requires more practice to become a consistent method; a large portion of mitigating damage taken, and therefore needing to heal less which takes time away from damaging the boss, is switching between a shield and a magic staff (for their added magic defence) and the spear between attacks, and optionally switching between a magic prayer (e.g. Augury) and Piety. Making mistakes is also more punishing due to the increased risk of dying and effectively resetting the fight.

This is the best-in-slot available equipment for killing the Corporeal Beast in small teams. The setup shown in this section currently costs approximately 219,265,391 coins (or 106,412,916 without the Inquisitor's great helm and avernic defender, which are only marginally better for their high cost). See the table below for an overview of equipment alternatives in case this setup is not accessible or too expensive.

This is the best-in-slot available equipment for killing the Corporeal Beast in masses. The setup shown in this section currently costs approximately 118,379,276 coins. See the table below for an overview of equipment alternatives in case this setup is not accessible or too expensive.

Killing the Corporeal Beast with Ranged should only be done at masses or in very large teams.

This is the best-in-slot available equipment for ranging the Corporeal Beast in masses. The setup shown in this section currently costs approximately 1,009,145,369 coins. See the table below for an overview of equipment alternatives in case this setup is not accessible or too expensive.