The Corrupted Hunllef is the boss monster within The Corrupted Gauntlet. Its counterpart in The Gauntlet is the Crystalline Hunllef.

Both the Crystalline and Corrupted Hunllef use the same mechanics. 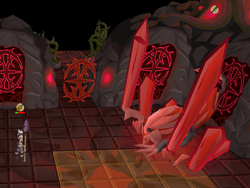 A player battles the Corrupted Hunllef.

The Hunllef will alternate between mage and ranged standard attacks after any combination of 4 standard, prayer-disabling, or tornado attacks.

During the fight, the floor will light up in various places. Tiles are initially highlighted in crimson and soon turn orange. If the player stands on an orange tile they will continue to take high damage until they step off of the highlighted tiles.

As the fight progresses, the tile patterns become more challenging, and the tiles change from crimson to orange more quickly. There are three sets of floor patterns and corresponding speeds, and which set is used is dependent upon the Hunllef's health. From 1000 to 667 health, the patterns will be from the first set and change at a slow speed, from 666 to 334 health the patterns will come from the second set and change at a medium speed, and while the Hunllef has 333 health or below the final set of floor patterns is used and the tiles change rapidly.

Protection against his attacks[edit | edit source]

Players can use their protection prayers to reduce the damage from the Corrupted Hunllef's standard attacks. Wearing pieces of the crystal armour will further reduce the incoming damage.