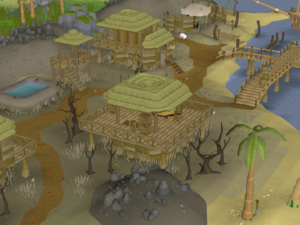 Corsair Cove is a small port town located on the southern shore of Feldip Hills. It is isolated from the rest of the area by large impassable cliffs. Unlike most of the western part of the world map, the cove is accessible to free-to-play players. It is featured in The Corsair Curse quest.

The area has a bank, which is only usable after The Corsair Curse quest, a poll booth, and three net/bait fishing spots south-west of the town.

Northwest of the port is the Corsair Cove Resource Area, which is only accessible after the completion of Dragon Slayer. Speaking to Haris after the quest will give you access to this resource area.

Using the resource area's fishing spot in conjunction with the deposit box outside the Corsair Cove bank can yield slightly faster trips (around 6 seconds there and back) over running from Karamja's lobster/swordfish spots to the boat then to Port Sarim deposit box. It will however drain more run energy due to there being no loading time while on the boat, but you will save on gold and have another inventory slot for fishing.

There are two access points into the dungeon: through the hole west of cove and through the cave inside Haris's resource area. It is a useful location for both members and free players to fight level 82 Ogress Warriors and Ogress Shamans, which are notable for the rune full helm, limpwurt root and the shaman mask drops.

North of the underground dungeon is a mining site with 5 coal, 2 mithril and 1 adamantite rocks.

Southeast is an inaccessible bank vault.

Southwest is an entrance to the Myths' Guild Dungeon.

The charter ships also have a dock in the harbour in Corsair Cove. It provides rides to several other locations. After completing Cabin Fever, the charter ship fare is reduced by 50%. Wearing the ring of charos(a) also reduces the fare by 50%. These two bonuses can be stacked to reduce the cost to 25%.