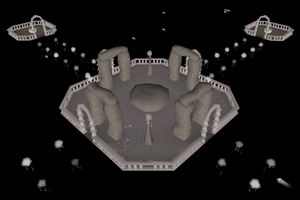 Inside the Cosmic altar. 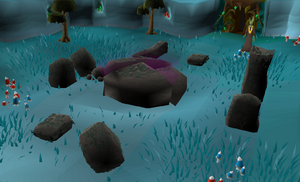 Outside the Cosmic altar.

The Cosmic altar is located in southern Zanaris, near the shady grove. Only pure essence can be used to craft cosmic runes, providing 8 Runecraft experience.

This section is a stub. Please help expand it.

From level 59 on (boostable) there are 2 cosmics created per essence, without giving any additional experience.

This is required for the Lumbridge & Draynor Diary hard task of creating 56 cosmic runes simultaneously.

A cosmic tiara may be created at this altar by having a cosmic talisman and a tiara in the player's inventory. The player must use the tiara on the altar; doing so gives 40 Runecraft experience.