Count Draynor Drakan[1] lives in a coffin in the basement of Draynor Manor. He was part of House Drakan, being the younger brother of Lowerniel, Ranis and Vanescula Drakan. 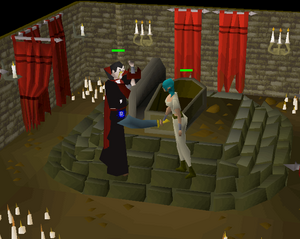 Originally raised alongside his siblings on the vampyre homeworld of Vampyrium, much of Draynor's history remains unknown. According to Vanescula, he liked to give himself various titles, but was considered to be cowardly by his siblings. He was eventually exiled from Morytania by Lowerniel and ended up west of the River Salve with his servant Ruantun, which caused them to be significantly weakened.

He is responsible for many deaths of avid adventurers and innocents who have fallen prey to his sharp fangs. Count Draynor is the target in the Vampyre Slayer quest which requires the player to kill him to save the people of Draynor Village, who have been terrorised by Count Draynor for centuries.

The health recovery rate of Count Draynor is very high - about six times the rate of ordinary monsters. To balance his health regeneration, fighting him provides greatly reduced Combat experience. Garlic does not affect this health regeneration; rather, when the Count is at full health it deals 10 damage, reduces his attack and strength by 10 levels, and reduces his defence by 40 levels.[2] The garlic effect happens on auto-attack delay, so it will happen when using any melee combat but if using magic you must autocast spells with a staff to trigger it - manually casting spells will not work. Garlic will also increase all damage you deal by 1.[3]

Count Draynor can be harmed with ordinary weapons, but cannot be killed by them. Once his health is low enough, players must drive a stake through his heart using a hammer in order to deal the final blow. If a player does not use the hammer and stake, he will heal to full health when his health points are low.

Due to Count Draynor's low magic defence, low-level combat spells like Earth Strike and Fire Strike are quite effective, and may be a viable option. If players decide to kill him with magic, players should be advised to not wear metal armour until they come in to use the stake for the kill as they have substantial negative magic accuracy. With full magic gear, a level 9 mage can kill him by bringing about 10 pieces of tuna, depending on luck.