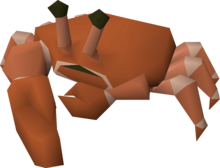 Crabs are found only in an undersea crab pen located in a Mogre Camp off of Port Khazard. Crabs can be killed for crab meat, which is an ingredient of fishcake. They will occasionally drop a fresh crab claw or fresh crab shell, which can be crafted into a crab claw glove and crab helmet, respectively. They will also sometimes drop an oyster.

The mogre camp area becomes available after beginning the Pirate Pete portion of the Recipe for Disaster quest. Players will need to speak to Murphy in Port Khazard and have him fashion a fishbowl (supplied by the player) into a fishbowl helmet and diving apparatus, after which he will assist them to travel to the bottom of the sea.

Smaller crabs can also be found on beaches around Gielinor, such as south of Port Sarim, on Mos Le'Harmless, and Fossil Island. These, however, are unattackable, and are essentially just scenery.

Drop rates estimated based on 55,476 kills from the Drop Rate Project, unless otherwise cited.