From Old School RuneScape Wiki
Jump to navigation Jump to search
Not to be confused with Crabclaw Isle.

The Crabclaw Caves is a dungeon found south of the Woodcutting Guild in Great Kourend. Access to the caves requires partial completion of The Depths of Despair quest. If players attempt to enter the cave without starting the quest, they will not be able to enter.

The location of the cave's entrance.

During The Depths of Despair, players must travel to the very end of the caves, and climbing down the tunnel entrance to find Artur Hosidius, who is searching for the Royal accord of twill, and finds a Sand Snake guarding the chest containing it. After the quest is complete, players can no longer access the bottom area, with the player stating "I don't really want to go down there again." 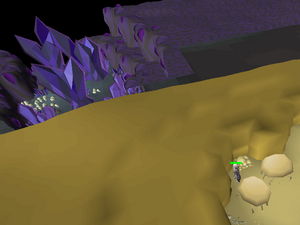 The southernmost part of Skotizo's lair can be seen from the Crabclaw Caves.
Retrieved from ‘https://oldschool.runescape.wiki/w/Crabclaw_Caves?oldid=14266521’
Categories:
Hidden category: