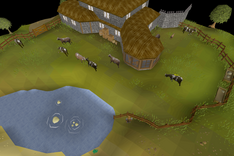 The cows on the west side of the guild.

The Crafting Guild is located south-west of Falador and north of Rimmington. It provides top-notch workshops for accomplished crafters. A Crafting level of 40 is required to enter the guild as well as wearing one of the following:

Players may remove these items while they are inside the guild without being kicked out.

The Crafting Guild was originally available only to members, but was opened to free-to-play after a few months, although the bank chest remained members-only.

In addition to walking to the guild, players may use the following transportation methods:

The west side of the ground floor[UK]1st floor[US] borders a cow pen. Entry to the guild is not required to access it. Players can kill the cows and bring the cow hides to the tanner on the 1st floor[UK]2nd floor[US] of the guild to have them tanned. Since this is the closest tanner to any cows in the game, this is an ideal location to craft leather goods.

The east side of the ground floor[UK]1st floor[US] has a members-only bank chest and deposit box for players who have completed the hard Falador Diary or have level 99 Crafting. This is considered to be the fastest way to access a bank for players with the crafting cape.

East of the ground floor is an exit leading to the guild's own outdoor mine containing 7 gold rocks, 6 clay rocks, and 6 silver rocks. This mine holds the largest amount of gold ore, silver ore, and clay for free players.

The 1st floor[UK]2nd floor[US] contains a tanner who can tan cow hides and dragonhide into leather and dragon leather. On this floor there are also two spinning wheels to spin wool.

There are several items that respawn on tables, including a ring mould, a tiara mould, a necklace mould, and a holy mould, and a pair of shears which respawns on a barrel.