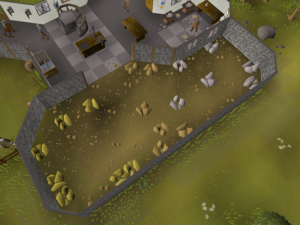 The Crafting Guild mine is a mine only accessible to those players who can gain entry to the Crafting Guild. In order to access the guild, players must have at least 40 Crafting level and wear either a brown apron or a crafting cape.

This mine offers six clay rocks, six silver rocks and seven gold rocks, but players will have to go elsewhere to smelt them. Clay can be used on the premises, however.

The nearest bank and furnace is in Falador. Members with level 26 Agility can take a shortcut tunnel under the city wall and go up the west side of the moat. Players with the crafting cape or having completed at least the hard Falador Diaries can access a bank chest and a deposit box, allowing them to bank the ore in the guild.

Located at the far west of the Free-to-play map, south of Falador and north of Rimmington, the Crafting Guild mining site can be accessed through the following means: