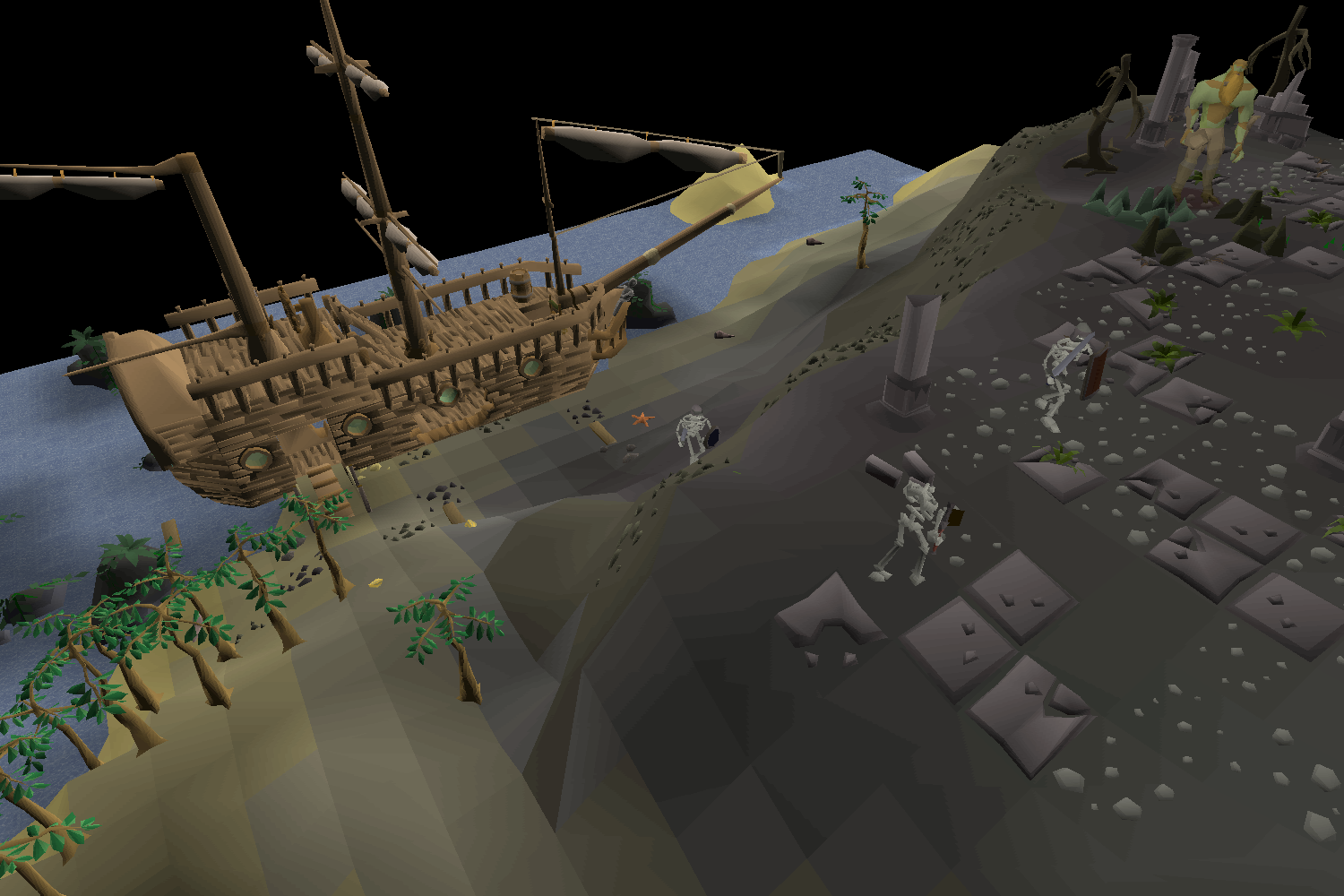 Crandor is a small volcanic island north of Karamja. Players can enter this island during and after Dragon Slayer.

According to the Guildmaster in the Champions' Guild, Crandor was once a "thriving community". When players return to him after speaking with Oziach, he goes into a detailed explanation of what transpired:

The Guildmaster also mentions that one needs to find a "ship made to the old Crandorian design", which hints that the Crandorians were excellent shipbuilders (in fact, Klarense tells the player when they inquire about the Lady Lumbridge that the ship is, in fact, originally from Crandor).

Furthermore, Duke Horacio also mentions Crandor when the player requests an Anti-dragon shield from him:

The ruins that cover Crandor are mainly of stone design, although any other materials were likely destroyed in the attack. Structures seem to have included brick walls, tiled floors, and supportive columns. Where the stone was obtained is unknown, although it may be igneous rock from within the volcano.

Crandor can only be accessed by boat after asking Ned to bring you to Crandor during the Dragon Slayer quest. After the quest, use the tunnel inside the east Karamja Dungeon. You walk to the volcano near to the fishing spot and then you come down in a dungeon. The room containing Elvarg can no longer be accessed once you've defeated her the first time, unless you're doing Dragon Slayer 2.

Crandor is home to a wide variety of monsters, each on different parts of the island. It is a very good island for mid to high level free players.

On the south-eastern tip, around the crashed ship, are skeletons. These skeletons are also on the western side of the island. On the northern tip are king scorpions and a little west of them are hobgoblins. A little south of these monsters are lesser demons, and far south of these monsters are moss giants. These monsters are often trained on by free-to-play rangers due to the many safespots. If you are doing Dragon Slayer, Elvarg, the big green dragon, will be in a cave walking around until you fight her. If, however, you have finished the quest, Elvarg will be there, but will not be attackable. In the cave, you'll find skeletons, plus some lesser demons near the door that connects the cave with Karamja Dungeon.

Crandor also has some rocks which players can mine through the Mining skill, which are labelled on the map with a small pickaxe. There are four mining areas on the island.

Other than those mentioned, the mine approaches are often infested with level 22 skeletons, level 40 hobgoblins at the northern end, and level 56 king scorpions.

There is also a dungeon underneath the island which connects to Karamja, which is labelled on the map with a red exclamation mark. In it are skeletons, deadly red spiders, lesser demons, and Elvarg for the Dragon Slayer quest.

Dragon Slayer - Players in the Dragon Slayer quest need to access this island using either the Lady Lumbridge or Crandor and Karamja Dungeon to fight and kill the dragon, Elvarg. After completing the Dragon Slayer quest, players will only need to return to Crandor for a step of Treasure Trail clues, which they can do through the secret entrance unlocked during the quest.