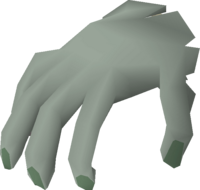 Crawling Hands are Slayer monsters that require level 5 Slayer to kill. The Crawling hands are the first Slayer monster a player can defeat upon reaching the required level. They are also one of the creatures that will sometimes "die" in a perfect form allowing you to get it stuffed by a taxidermist and mounted in your player-owned house.

Due to their undead status, the Crumble Undead spell and the salve amulet do work on them.

Drop rates estimated based on 1,587,000 kills from the Drop Rate Project, unless otherwise cited.[1]

The average Crawling Hand kill is worth 172.74.