From Old School RuneScape Wiki
Jump to navigation Jump to search
Not to be confused with Deranged archaeologist.

Bellock, the crazy archaeologist, is an insane individual and demi-boss who resides in the ruins south of The Forgotten Cemetery. He uses Ranged and melee attacks and can perform a special attack where he throws explosive books that explode in a 3x3 area.

Bellock is one of the three Wilderness bosses that drop one of three shards of the malediction ward and odium ward.

Despite his high Magic defence, he has a negligible Magic level, and thus has a weakness to Magic. This is because Magic defence is primarily based on one's Magic level.[1]

Killing Bellock is a popular way for Ironmen to obtain a rune crossbow without having to train Fletching or Smithing.

The deranged archaeologist also counts towards a crazy archeologist boss Slayer task. It cannot be killed as an alternative if the Wilderness is specified as the task location when the task is received from Krystilia or Konar quo Maten. 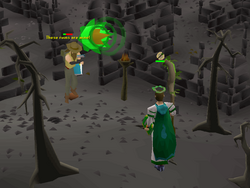 It is recommended to use Magic armour with the Trident of the seas while praying range and avoiding his special attack of explosive books as soon as he says, "Rain of knowledge!" The best way to avoid it is by keeping a considerable distance, and running towards him until you are two squares away from it (this way, you will avoid Melee damage), and repeating the same steps over and over, you will minimise the chance of receiving damage.

Another strategy is to use high Ranged Defence armour (like Torag's armour and Obsidian shield) with a Zamorakian hasta or Abyssal whip along side with the Protect from Melee prayer.

The fastest way to get there is by using the spell Dareeyak Teleport from the Ancient Magicks spellbook with 78 Magic or a Dareeyak teleport tablet. Alternatively a burning amulet can be used to teleport to bandit camp and run to the ruins.

His location in the wilderness is single target only.

One quote is said every time Bellock attacks the player.

The average Crazy archaeologist kill while on a Konar task is worth 13,816.26.