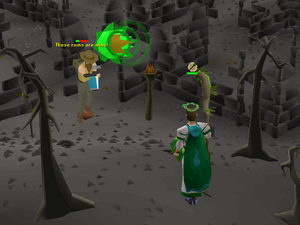 The Crazy archaeologist is a relatively simple boss, but a simple mistake can cause some damage to you with his area of effect attack.

The most effective way is to use Magic while protecting from ranged and avoiding his area of effect attack. His area of effect attack casts 3 books into the air that slowly land and hit a 3x3 area. This area is centred around where the books land. It is preceded by the Crazy archaeologist yelling "Rain of knowledge!".

It is recommended to bring low value gear such as Monk robes for Prayer bonus as even with the Crazy Archaeologist's somewhat high Magic defence, his Magic level is negligible, and thus is weak to Magic and your own Magic accuracy matters little. This is because Magic defence is calculated primarily based on one's Magic level.[1]

While you can melee him, his defensive stats are very high and you cannot protect from all of his damage as you can with mage.

The setup primarily consists of only taking 3 or 4 expensive items as this boss is located in the Wilderness with the possibility of player killers appearing. Although the Crazy archaeologist is within the teleport range in the Wilderness (up to level 30 Wilderness), you may get teleblocked. Untradeable items such as god capes are lost upon death above level 20 Wilderness. The Crazy archeologist usually wanders around between level 22 and 25 of the wilderness, so be careful.