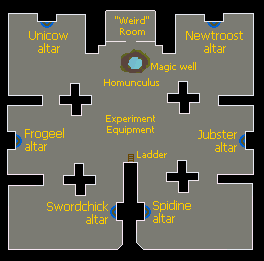 The location of each creature's Altar of Life within the dungeon

Creature Creation is a minigame that involves creating unique hybrid monsters and killing them for their drops. It can be found in the basement of the Tower of Life after completing the Tower of Life quest. A trapdoor on the ground floor of the tower leads to the basement. The Builder's costume is not required to enter the tower once the quest has been completed.

Some of the monsters drop multiples of items that are otherwise hard to get or expensive to purchase, such as Unicorn horns, which are used to make Unicorn horn dust for Herblore. Players who have completed tiers of the Ardougne diary will receive these drops in noted form.

Some of the monsters are dangerous, so bringing food may be advised. Players needing food while creating creatures can pickpocket the workers outside the tower to obtain triangle sandwiches. 'Black-eye', 'Gummy', 'The Guns', and 'No fingers' can be pickpocketed, but not Bonafido.

There are six Altars of Life:

An Altar of Life.

Players use several items to create the monsters:

Placing one each of the two items at the correct altar primes the altar, and activating the altar creates the mixed creature. All but one of the monsters in turn drop one of their ingredients in quantity (at least two) on each kill. Unicows for example drop unicorn horns. The monsters occasionally also drop various types of satchels (black, gold, green, plain, red, rune), which can be held in the shield slot and each can hold one triangle sandwich, one cake, and one banana, and tea flasks, which can hold the contents of up to five cups of tea.