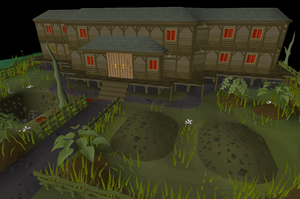 Crombwick Manor is a large manor located in the town of Slepe. Its owner is Lord Crombwick. According to the deed found on the ground floor of the manor, the manor itself was called the "sleepers manor", and was given to the Crombwick family by Lord Drakan himself during the early Fourth Age.

As the entrances to the manor are locked, it is only accessible via the ladder in Kroy's laboratory in the Sisterhood Sanctuary.

The manor was taken over by the vampyre Damien Leucurte, who brought several vampyre juveniles and vyrewatch to the manor, keeping Lord Crombwick inside, and had his servant Kroy develop the Elixir of Everlasting-infused bloody bracers to spread the sleeper sickness to the inhabitants of Slepe in its basement. During Sins of the Father the player and Veliaf Hurtz uncover Leucurte's scheme and manages to slay him, but unable to save Lord Crombwick, who is killed by Leucurte to strengthen himself.

While the upper level of the manor appears dark and unlit, a light source can be used to brighten the area, although it is not mandatory.