Players can create a crystal axe via a singing bowl by combining a dragon axe, 120 crystal shards and a crystal tool seed. Doing so requires level 76 Smithing and Crafting to sing the crystal (the levels can be boosted), and grants 6,000 experience in both skills. If the player does not meet the Smithing and Crafting requirements, they can have Conwenna or Reese sing the crystal for them for an extra 60 crystal shards, for a total of 180.

The crystal axe does not consume charges for certain activities where it provides no benefit compared to other axes:

A dangerous death in PvP causes the crystal axe to revert to a dragon axe, which will be then dropped for the killer. All crystal shards will be lost should this happen. 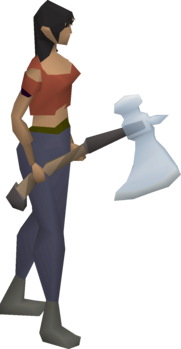 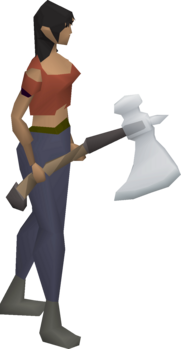 A player performs the crystal axe's special attack, Lumber Up.

The crystal axe has a special attack, Lumber Up, that provides a visible +3 boost to Woodcutting (meaning that from level 72-75 Woodcutting, you can use the special attack to obtain magic logs from a magic tree). This consumes 100% of the player's special attack energy, though it cannot be used without the level 70 Attack and 50 Agility requirement to wield the axe.

When created, the crystal axe starts off at 10,000 charges and degrades like all crystal equipment, with one charge being depleted for each item that is chopped using it; once the axe's charges have been fully depleted, it can still be used to cut wood, but will act like a dragon axe. Wearing an elven signet while using crystal equipment will provide a 10% chance to not consume charges. Certain actions that require an axe, but do not benefit from the extra effect of a crystal axe, will not consume any charges.

In order to add charges to the crystal axe, crystal shards must be used on it (this can be done before it is inactive as well), with each shard granting 100 charges, up to a maximum of 20,000. Dismantling a crystal axe will return the dragon axe and crystal tool seed to the player and doing so will lose all crystal shard charges that were previously loaded.

The version of the axe intended for release with The Eyes of Glouphrie.

The crystal axe was originally intended to release in 2006 as a reward from the The Eyes of Glouphrie quest. For unknown reasons, it was cut before release, leaving the crystal saw to be the reward instead. Despite this, its models and sound effects remained unused in the game files. The exact mechanics of how this version of the axe was intended to function are unknown, although the name of one of the sound effects associated with it indicates it would use charges like other crystal equipment.

A crystal axe would finally see a release in 2019 alongside the Song of the Elves quest after passing Content Poll 64.