The crystal bow is a bow made from enchanted elven crystal. It requires the completion of Roving Elves to wield, as well as 50 Agility and 70 Ranged. The bow benefits from damage and accuracy boosts when crystal armour is equipped.

A crystal bow is created when an elf sings to a crystal weapon seed and enchants it into a bow. The most prominent elf with this talent is Ilfeen, who will perform this service for players for a price. However, she can only do this with a weapon seed; partially charged bows should be reverted to their seed form (using the right-click menu in the inventory) to be converted back into a bow. 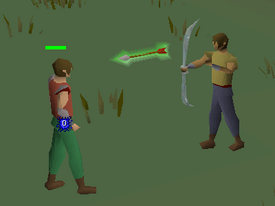 A player attacks a target with a crystal bow.

Because it is blessed by the elven goddess Seren, the crystal bow does not require any arrows to use, as it generates its own when fired. The bow's fired shots are coated in a green aura, similar to Craw's bow.

The crystal bow can be considered the penultimate bow in the composite bow family, before the bow of Faerdhinen. It shares the same 10-square attack range on any style as well as a 4-tick attack speed on rapid, placing it between popular ranged weapons like the shortbow (3-tick) and crossbow (5-tick).

The crystal bow is required to complete the Hard Western Provinces Diary. It is also used for two Master Clue steps: an emote step and as a possible item to show Falo the Bard.

Along with being extremely accurate and providing a Ranged bonus of +100, the crystal bow also has one of the longest ranges in the game, the same as a longbow, able to hit targets up to 10 squares away. However, longrange does not increase attack range. This makes it ideal for battles which require long-range attacks such as Dagannoth Kings or the TzHaar Fight Cave. Destroying the respiratory system of Abyssal Sire is also another situation where the long range is advantageous. The only attack which can be performed from a further distance is the dragonfire shield special attack, with a range of 13 squares. Not needing ammo, it allows the use of a blessing, effectively giving the bow a +1 or +2 prayer bonus, compared to other ranged weapon and can be used without Ava's device, which can make simpler switching in situations requiring multiple combat styles, such as fighting Demonic gorillas, furthermore can be brought to Wilderness without risking any ammo. With the accuracy and damage bonus provided by crystal armour, the bow becomes a very powerful weapon usable in many high-level situations requiring ranging, but it's not very popular to do so due the high maintenance cost of the crystal armour.

Although crystal bows do not require any ammunition, they still have a cost associated with their use, in the form of their recharge cost. When the recharge price is 900,000 coins, the cost per shot (at 2,500 shots) is 360 coins. However, when the recharge price decreases to 180,000 coins, the cost per shot is 72 coins. Compare this to rune arrows, with a +49 bonus to Ranged Strength, whereas the crystal bow has a Ranged Strength of +78.

The chief disadvantages that crystal bows have, compared to other bows, are the requirements for using them. Crystal equipment has the second shortest lifespan of any equipment in the game (ahead of Iban's staff). One crystal bow will last for 1 hour and 40 minutes of continuous shooting on Rapid, or 2 hours and 5 minutes on Accurate or Longrange. Players who plan to use crystal bows on extended trips may wish to bring more than one bow. Additionally, players who would normally pick up their ammunition (either manually or through an Ava's device) may not save money by using a crystal bow, which requires no ammunition and therefore leaves behind no arrows to pick up.

The crystal bow degrades over time. Upon degrading, it reverts into an inactive version of itself, which can then be recharged at a singing bowl, or by having Ilfeen recharge it for a fee. When uncharged, it can also be converted back into a crystal weapon seed, which can then either be turned back into a bow, a halberd or a shield. This may also be done at a singing bowl or with the assistance of Ilfeen. Ilfeen can either be found inside Prifddinas (after completing Song of the Elves), or teleporting back and forth between two clearings in Isafdar.

Initially, Ilfeen charges 900,000 coins to re-enchant a crystal seed into a crystal bow. However, the price is decreased by 180,000 coins each time Ilfeen re-enchants a seed for a player, in the following manner, until reaching the minimum recharge cost of 180,000 coins:

For players who have completed Song of the Elves, an alternative way of making crystal weapons is using a crystal weapon seed and 40 crystal shards along with 78 Smithing and 78 Crafting on a singing bowl in Prifddinas. Players who do not meet the skill requirements can pay a nearby elf to create the weapon for an additional 20 shards. Crystal shards can be used to recharge the weapon to a maximum of 20,000 charges, with each shard providing 100 charges.

However, it is far more cost efficient in the long term to instead use the crystal shards on potions and use the money from selling them to re-enchant your crystal equipment.

A crystal bow is a possible reward for completion of Roving Elves. However, when obtained through this quest reward, the crystal bow will only begin with 500 charges. Players who chose a crystal shield can choose to let the shield revert into a seed, then re-enchant that seed into a crystal bow. When the seed is re-enchanted by Ilfeen, it will have 2,500 charges.

Additionally, players can buy new crystal bows from Islwyn just north of the south-east Prifddinas bank for 900,000 coins each. Unlike Ilfeen's recharge price, the price of a new crystal bow does not decrease.

As crystal weapon seeds are tradeable, players can buy them from other players and pay Ilfeen to re-enchant them into crystal bows. Ilfeen's possible locations are below.

The crystal bow (doesn't have to be fully charged) is the item Falo requires players to show him when he sings about: A bow of elven craft was made, it shimmers bright, but will soon fade.