The crystal bow was a degradable bow made from enchanted elven crystal. It required the completion of Roving Elves to wield, as well as 50 Agility and 70 Ranged. Along with the crystal shield, crystal halberd and the crystal saw, it was one of the four pieces of crystal equipment in RuneScape.

These crystal bows functioned differently to the present day Crystal bow. They would degrade over time with use, and their stats would gradually decrease as the bow degraded. Furthermore, the bow could be traded when it was entirely new, and turned into banknotes.

With the release of Song of the Elves, all existing Crystal bows reverted into Crystal weapon seeds. As a result, these items are currently unobtainable; however, they remain in the game files. 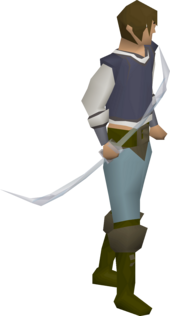 The crystal bow could be imbued for 2,000 Nightmare Zone points per charge, requiring 20,000 points to imbue a fully charged bow. Imbuing the crystal bow did not keep it from degrading, however its stats would remain at their maximum, regardless of how much it had degraded. When the bow reverted back to a crystal seed, it would lose its imbue, and players had to imbue it again using points from the Nightmare Zone. Additionally, imbuing a crystal bow that had already degraded to 9/10 or below would restore the bow's stats to their maximum.

A crystal bow with 2/10 charges was a possible reward for completion of Roving Elves. Additionally, players could buy new crystal bows from Islwyn for 900,000 coins each.

As crystal seeds were tradeable, players could buy them from other players and pay Ilfeen to re-enchant them into crystal bows.