Crystal outcrops are normal crystals with the blessings of the River Salve absorbed inside it. These glow in an iridescent shade of deep magenta and can only be found in the bottom-most level of the Abandoned Mine. They are most commonly used for obtaining salve shard to make the useful salve amulet. One must cut a shard off these to finish the Haunted Mine quest. 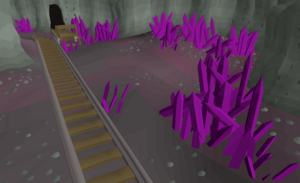 The crystal mine found in the Abandoned Mine

The Crystal Outcrop can be cut with a chisel to receive a salve shard. With this, one may do the following:

When the shard is used with a ball of wool, a player then crafts the salve amulet. It gives the wearer a 15% attack and strength boost while attacking undead monsters. This boost works on a large variety of undead creatures, including shades and ghasts.

After the completion of Haunted Mine, and having crafted of a salve amulet, one may venture through the miniquest The Lair of Tarn Razorlor. The reward for completing the miniquest is Tarn's diary. Using the diary on a Salve amulet will cast the enchantment of Tarn on it, increasing the boost to 20% while attacking undead monsters.