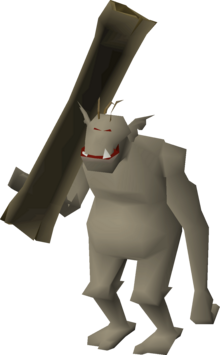 Dad is an abnormally large troll that players must fight during the Troll Stronghold quest. Dad can be re-fought in the Nightmare Zone minigame after the player has completed Troll Stronghold.

Since nearly all trolls are named after the thing they first ate, Dad got his name from eating (or trying to eat) his father. This is further confirmed by Dad himself, as Dad replies "Troll named after first thing try to eat!" if a player asks about his name. He challenges players, either doing Troll Stronghold or not, to fight him in the Troll arena so players can pass him and have access to the northern side of Troll Country, including the God Wars Dungeon.

If a player tries to open the arena exit without fighting Dad, he will shout "No human pass through arena without defeating Dad!" and attack the player. He will also ignore the player if talked to.

He will stop the player from attacking just before he dies to ask you to spare his life. It is recommended that you spare his life, because if you choose to kill him after he has surrendered, he will drop Big bones and you may continue, but all the Troll spectators in the arena will become aggressive towards you and will try to kill you, so if you kill him, be ready to run to the northern gate. If you just let him live, he will allow you to pass through the gate anyway, and the troll spectators won't become aggressive.

Dad is larger and stronger than normal Trolls, so much that he actually wields a large, hollow tree trunk in battle. He is very powerful and can hit into the high 20s. His hits are slow, but fast at times. When he hits there is a 1/3 chance that he will do a giant swing that sends player flying through the air, knocking them back and momentarily stunning them. Protect from Melee is recommended when fighting him. Despite his strength, Dad is notable for being one of two non-Aggressive trolls which can be fought, the others being Troll spectators. You should stay near a wall while fighting him as this prevents his giant swing from knocking you back, although it will still stun.

Dad is unable to walk through players, so one possible strategy is to have a friend stand in his way so he can't get close enough to attack.

Once Dad is defeated, the player can no longer attack him. Trying to attack him yields the message "You don't need to fight him again."

Safespot: Stand next to the gate as you enter arena (range/magic)