The daeyalt essence mine is a mine found beneath the city of Darkmeyer, in the lower tier of the city just north-west of the Darkmeyer General Store, indicated by a dungeon marker. The mine was once home to the Stone of Jas, the presence of which caused the mineral deposits in the area to change, creating daeyalt essence and daeyalt ore.

Mining the daeyalt shards here requires level 60 Mining and completion of Sins of the Father. Within the mine, players will find three daeyalt essence rocks, but only one is active at any given time, indicated by a brighter shade and a spiral of sparkles around it. The active rock changes randomly, roughly every 60 seconds, and players will need to run between them to continue mining. Daeyalt essence can be used in place of pure essence for runecrafting, which will net players 50% more Runecraft experience for any given action.

Mining the essence gives stackable daeyalt shards, which can be exchanged for daeyalt essence via Noranna Tytanin on the eastern side of the mine for an equal amount. The essence will be sent directly to the player's bank. However, players will need to wear vyre noble clothing to interact with Noranna.

While mining essence, players receive 2–3 shards and 5 experience for every roll. With a dragon or crystal pickaxe, players can obtain approximately 5,000 daeyalt shards and 10,000 Mining experience per hour. Unlike at the dense essence mine, the crystal pickaxe increases the rates of the mined essence and thus consumes charges.[1] Tick manipulation may be used to mine essence, particularly 1.5-tick methods to obtain shards nearly twice as quickly (for up to 9,000 per hour). The experience boosting effect of prospector kit works, however the extra yield effect of certain mining enhancers do not. Players are also able to receive uncut gems while mining daeyalt essence, so it may be worthwhile to bring a gem bag for extended trips; a charged amulet of glory may also be used to increase the rate of gems mined, although this lowers the rate of obtaining shards.

There are also 13 daeyalt rocks found here, and a steel pickaxe spawn by the northern essence.

The essence mine becomes available after completion of Sins of the Father. To reach the mine, several routes can be taken: 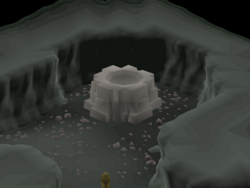 The plinth which held the Stone of Jas.