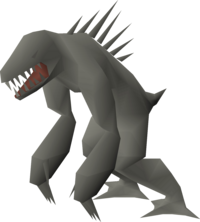 Dagannoth are sea-based monsters that live in the Lighthouse basement (close to fairy ring code alp) after players complete Horror from the Deep (type 1 in the table). They can also be found in the southern part of the Catacombs of Kourend, as well as the Jormungand's Prison after completion of The Fremennik Exiles (type 2 in the table).

This variant of dagannoth has three levels — 74, 92 and 100. The level 100 variant is fought before the dagannoth mother during the Horror from the Deep quest. It doesn't drop anything and cannot be fought again after the quest. It only uses a melee attack that can hit up to 9. The level 74 in the Lighthouse uses a ranged attack that hits up to 10, but has poor accuracy. The level 92 dagannoth uses melee, which is more accurate and hits up to 8. In the other areas, both levels use melee. The Lighthouse basement is a multicombat area and therefore many players use dwarf multicannons to train here. A dwarf multicannon cannot be used within the Catacombs of Kourend. Despite the Combat level of these dagannoth, they are considered very weak by most players especially in comparison to the stronger variant on Waterbirth Island. They also seem to be susceptible to poison. Players with decent defensive bonuses shouldn't have any trouble fighting for long periods of time.

Protection prayers, Bones to Peaches, Guthan's, and the Saradomin godsword special attack are all viable means of surviving for extended periods. Players with 70 Prayer can use a dragonbone necklace and bonecrusher/bonecrusher necklace to sustain more prayer points.

The dagannoths in the Catacombs of Kourend can be safespotted, but not reliably. If using melee, the area near safespot 2 can be used to fight only one dagannoth at a time.

The dagannoths in Jormungand's Prison are in multi-combat, a cannon can be set, and only attack in melee. No food is required here if using Protect from Melee.

The average Dagannoth kill while on a Konar task is worth 1,548.58.