From Old School RuneScape Wiki
Jump to navigation Jump to search
The RuneScape Wiki also has an article on: rsw:Dagannoth
This article is about the dagannoth race. For other uses, see Dagannoth (disambiguation). 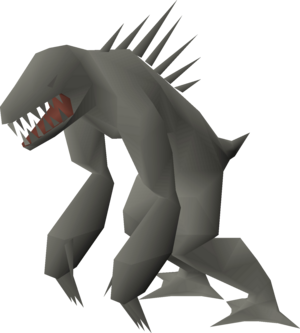 A melee dagannoth, found in the Lighthouse and Catacombs of Kourend.

Dagannoth (known as daggermouths to the Fremennik) are sea monsters. Many are found near areas inhabited by the Fremennik, who hunt them for their skin and use it to make armour. There are many types of dagannoth, the most powerful being the three Dagannoth Kings.

Little is known about the origins of the dagannoth species. Dagannoth are first documented in Third Age where they started attacking the Fremennik, causing great losses to them. The Fremennik call the dagannoth "dagger-mouths", most likely due to their sharp teeth.

If assigned dagannoths on Waterbirth Island by Konar quo Maten, safespot options are limited. There is a skeleton in the first level of the Waterbirth Island Dungeon which can be used as a safespot once dagannoth are no longer aggressive. Players can either fight dagannoth for 10 minutes without moving around in the area, or turn auto-retaliate off and tank a Rock Crab for a while, in order to set the safespot up. Players could also opt to kill the Dagannoth Kings instead, when given this task and location.

There are several types of dagannoth, which vary by level, location and occasionally name. For information on a specific type of dagannoth, see its article.